After tough start, Kim has excelled as a Johnny 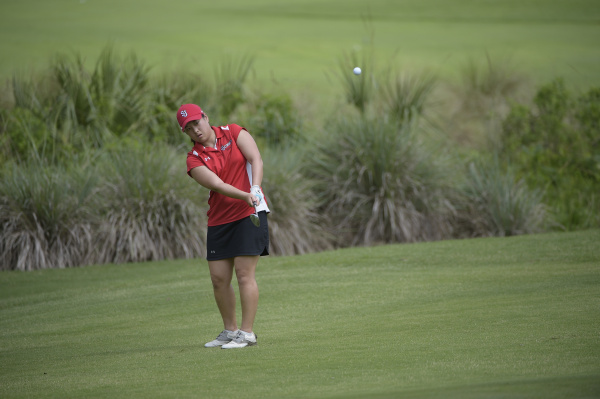 Anna Kim is putting St. John’s women’s golf on the map. The charismatic junior is heating up when it counts, helping St. John’s finish fourth in this years Big East Tournament.

Kim stepped up for the Johnnies, finishing first on her team and seventh overall.

She carded a 230 (+14) through three rounds of play, shooting a week-low 74 in the final round. Her impressive short game kept her in the mix. Along with timely putting, Kim held her own with the best golfers in the conference.

Strong senior leadership has brought the Red Storm closer together. The chemistry is at an all-time high and Kim agrees.

“We went through a lot of up and downs and that made us support each other even more,” Kim said. “It’s been quite a journey this year and I feel like we are family because we are always there for each other.”

Golf was a family affair for the Kims. Anna’s father Jongsung made sure Anna and her two sisters (Sebin and Alexa) started young. Anna even recalls frequent trips to the driving range with her father back in Canada.

East coast courses were no match for Kim. She first showcased her dominance in the Rutgers Women’s Invitational, shooting a two round total of 144 (+2). She led the field, tying for first and capturing the best round of the week with a 69.

“It was hard to playing golf during the wintertime, as Arizona is warm all year around. But, being closer to family was something I thought was important for myself,” Kim said.

Having to adjust quickly after transferring from the University of Arizona, Anna adapted to the New York lifestyle.

“Coach and my teammates have been treating me so well to adapt here at St. John’s,” Kim said. “It was a little tough my first semester to get used to the environment; but, since my sister Sebin stayed here one more year with me and she was on the team before, coach Bishop and some of the upperclassmen girls has been very helpful.”

Her efforts were rewarded, and Kim was recently named Big East Women’s Golfer of the Week after a stellar performance at the Seton Hall Pirate Invite. She earned fifth place after totaling a 150 (+6) through two rounds. This is a characteristic that Kim has shown through many lights- out performances this year.

In fact, the Canadian native has finished among the top 15 in all eight events this year and has been in the top five for five of them.

Kim’s future is bright. She understands her talent and puts it on display every time she hits the links. So, what’s next for Kim?

No one is certain, but we have a pretty good idea.

“Five years down the road, I see myself playing in the LPGA. I have always wanted to play professionally, and, even though it may be challenging, I am ready to face that challenge,”  a smiling Kim said.