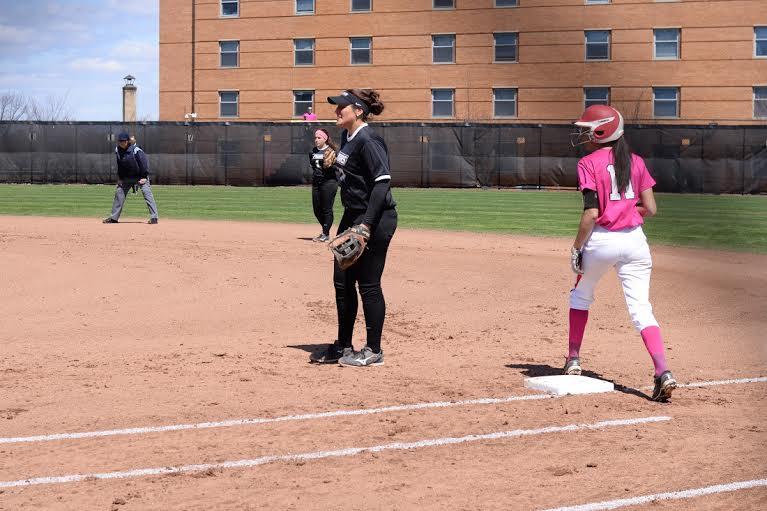 Brittany Garcia had a stellar week as she batted .600 with nine RBI’s and two homers en route to the Big East Weekly Honor Roll.

The St. John’s softball team has torn up the Big East this season.

The Red Storm (21-13, 12-0) extended its Big East twelve game-winning streak after a stellar offensive display this weekend against Seton Hall. They hit well in all three game of the series, as they swept the Pirates 8-1, 12-4 and 4-0.  With only a few more weeks left before the Big East Championships, head coach Amy Kvilhaug wants to see “continuation of consistency” in the final weeks of the season.

“I thought Seton Hall had a really good ball club,” Kvilhaug said. “They have a pretty deep offensive lineup and came to play.  Our challenge was to come out with our ‘A’ game and to play at a high level against a quality team for at least 21 innings this weekend.”

On Saturday afternoon, in their first game of a double-header, not much happened in the first four innings until freshman Krystal Puga started off the fourth inning with a base hit into the center, followed by a double by Erin Burner. Sophomore Brittany Garcia was able to put across the first run of the game with a RBI groundout to second to score Puga, giving the Red Storm a 1-0 advantage.  Freshman Savannah Warren would continue the Red Storm rally with an RBI single as the Johnnies took a 2-0 lead to the bottom of the fourth.

Puga and Garcia both added a home run each in the seventh inning to give St. John’s the 8-1 win.

In the top of the fifth sophomore Monique Landini and Puga had back-to-back doubles, as Burner helped bring in more runs with a two-run home run down the left-field line, extending the lead to 5-0. But, the Pirates were not going to let that go as they fought back with four-consecutive base hits leading them to their first run of the game, 5-1.

As they came back for the second game of the double-header, Seton Hall tried their best to turn it around, taking advantage of a St. John’s error and leading 1-0.

But Garcia started off in the top of the second inning with a stand-up double into left, followed by junior Yvonne Rericha putting a few players in scoring position by laying down a sucessful bunt base hit. After a hit by Warren, two runners would score for St. John’s, giving them a 2-1 lead.

To kick off their final game on Sunday, the Pirates pitching held the Johnnies offense to less runs, but they couldn’t get any runs across the plate on the offensive side of things. The Red Storm was able to scratch across four late inning runs to win 4-0.

Free dominated the Seton Hall offense for the second time of the weekend. She pitched her second straight complete game, shutting out the Pirates while allowing five hits and striking out five.

This coming weekend the team will be playing against Creighton in Nebraska.