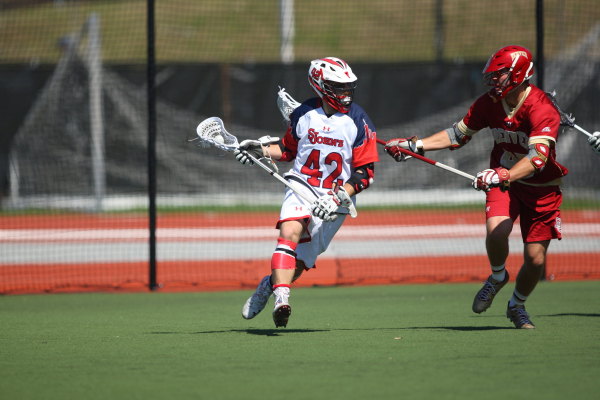 Despite a hot-start  with a variety of shots,  plenty of hat tricks and attackmen Eric DeJohn and Stefan Diachenko’s three goals each, it was still not enough to overcome Villanova’s high power offense. The Red Storm lost in a 21-11 defeat on Saturday night.

St. John’s came out aggressively taking an early 4-1 lead in the first 5:47 first quarter and had a lead of 9-8 midway into the second period. From there, the Wildcats took control to close the half with a 10-9 lead, holding St. John’s scoreless in the third period, while capitalizing on an 8-0 run.

“Things really spiraled away from us in the second half, and collectively, as a group, we played like a frustrated team,” St. John’s head coach Jason Miller said. “We’re a better lacrosse team than the last 30 minutes showed tonight.”

St. John’s dropped to 3-10 overall, 1-3 in Big-East play, but does remain alive for a spot in the 2015 Big-East Championship with a must-win game at Georgetown on Saturday, April 25.

Providence also needs to beat Villanova (6-6, 1-3) on the same day in order for the Red Storm to clinch a playoff berth into the conference tournament postseason.

Besides DeJohn and Diachenko, five different Johnnies Nick Heller, Brian Gaffney, Jack Lally, Jason DeBenedictis and Michael Paoline each scored a goal. St. John’s as a team went 12-for-12 on clearings, along with only committing seven turnovers.  However, the Red Storm were outshot 55-33, picked up fewer ground balls game 27-21 and lost 23-of-36 face-offs, while Villanova took control of 4-of-9 extra man opportunities.

For the Johnnies,  DeJohn finished with a hat trick with goals (3) and assists (3) while senior co-captain  Diachenko had two assists for a total of five points. Sophomore face-off man Jack Lally and junior long-stick midfielder (LSM) Michael Paoline, scored their first ever career goals. Senior LSM Chris Fisher Jr. picked up a team-high of five groundballs while the other senior co-captain and defenseman Mark DiFrangia added three.

Early in the contest, St. John’s connected on all angles, scoring a combined six goals in the first quarter, the highest scoring opening period for the Red Storm this season.

However, the Wildcats quickly came back from a three-goal deficit in the last 5:15 of the first to even the contest 6-6.

The Johnnies never recovered from Villanova’s offensive burst in the second and third quarters and allowed the Wildcats to score their most goals since April 17, 1999 against St. Joseph’s.