Tennis coach has taken on challenging, but familiar role 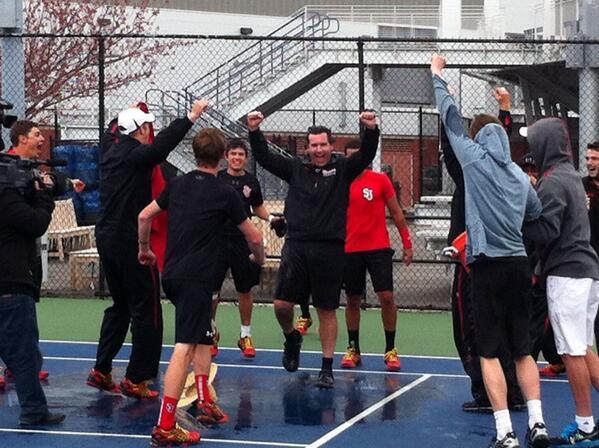 The St. John’s tennis program was in need of a women’s tennis coach before the season. Instead of looking outside for a  new head coach, they looked within.

“I enjoy mentoring the kids, teaching them about life. My love of tennis, I love teaching the game. I love using tennis for life,” Rebhuhn said.

“I spent most of my life the last 14 years building a really, really good tennis program on the men’s side. My goal as a coach is to accomplish the same goals for the women’s program as we have for the men’s.”

Rebhuhn received a tennis scholarship at Concordia College in 1993, where he won over 150 matches and also received his degree, a B.S. in psychology. Aspiring to build a career within the sport, Rebhuhn pursued his M.A. in physical education with a specialization in sports psychology at the University of Northern Iowa.

As a two-time Big East Coach of the Year and after leading the men’s squad to winning its third conference championship crown and securing its first ever NCAA Tournament berth, Rebhuhn is looking to elevate both St. John’s programs to the next level.

“There needs to certainly be synergy between the two programs,” coach Rebhun said. “I really felt that I can give a certain edge to the women’s program and bring them up to the same level as the men’s and have two great programs. I was lucky enough to be given the opportunity and I feel it’s going to be a win-win for everybody and everybody deserves the opportunity to be successful.”

Aside from leading his players to success on the playing field, coach Rebhuhn takes a lot of pride for his athletes in contributing to off-the-field success as well.

Growing up on the North Shore of Long Island, about 10 miles from St. John’s University, Rebhuhn’s passion for the sport was influenced by his father at an early age.