Track and field keeps on rolling during historic season 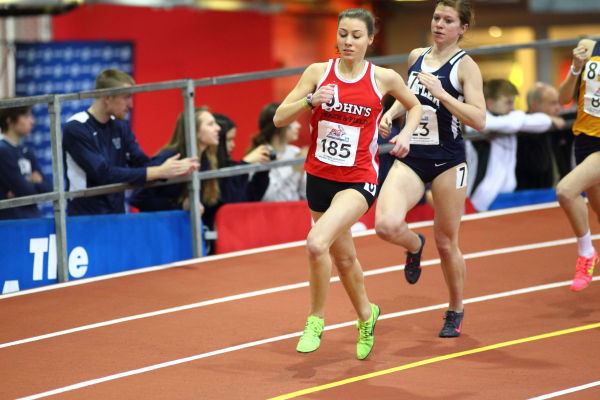 During the first day of the Larry Ellis Invitational hosted by Princeton University, the St. John’s track and field team continued to shine as they broke two school records and had a few athletes finish in the top 10 on Friday.

Freshman Izzi Batt-Doyle and  junior Stephanie Van Pelt both set school records in the steeplechase and the 1,500-meters. Marlow Schulz and Nyla Woods qualified for the USA Junior Championships in Eugene, Ore. in June.

“We had an exceptional opening day at the Larry Ellis Invitational,” head coach Jim Hurt said. “Our ladies continue to be impressive in their competitive efforts in all event areas.”

Junior Stephanie Van Pelt had already broken a school record in the indoor 1,000-meter run this past winter at the ECAC Championship and broke yet another record on Friday.

“Running at Princeton is always fun.  It’s a fast track with good competition.  I did surprise myself with breaking the school record.  I knew I was able to do it this season but I didn’t know I was capable of dropping seven seconds off my time at once,” Van Pelt said on breaking the record. “But, the exciting thing about track is every race is different so everything is always a surprise.  I know I can run faster and I hope I can qualify for regionals this season.  It will be exciting to see when championship season comes.”

Batt-Doyle made her collegiate debut in the 3,000-meter steeplechase. She finished eighth but set a new school record time of 10:19.54. She beat the program record by 55 seconds, which was set in 2012.

Schulz finished in 12th place in the 800-meter run  with a new personal-best time of 2:09.91, which was the fifth fastest in the history of the program.

Freshman Nyla Woods earned third place and had a new personal best toss of 55.03 meters in the women’s hammer throw. Woods’ toss was the fifth best mark in school history. She arrived at the event ranking third in the Big East. Now, she is four centimeters behind Big East Champion Danette Hinton for fourth place on the school’s all-time hammer throw list.

Senior Natasha Amazan also set a personal best mark with a throw of 52.31 meters for sixth place and sophomore Ann Dagrin took eighth place with a toss of 51.68 meters.

On Saturday, the  final day at Larry Ellis Invitational, the women’s track and field continued to show their dominance.

“Our sprinters picked up where we left off last night, posting personal and seasons best efforts along with Big East leading performances and ECAC Championships qualifying marks,” coach Jim Hurt said. “As the weather warms up, so will our performances, so we look forward to producing some hot marks next week at the Penn Relays.”

Freshman Chenoa Sebastian set a personal best time of 14.52 seconds in the preliminaries of the 100-meter hurdles to take 10th.

Sophomore Christine Oguledo ran in the 400-meter hurdles and had a personal best time of 1:03.08, which was one second off of the 10th all-time performance in the history of the program.

Collins finished eighth in 12.20 seconds in the preliminary round of the 100-meter dash. The team of Collins, King, Schwan and Stephens had a season best of 46.97 seconds for fourth place in the 4×100 meter relay.

Freshman Erica Graham competing in long jump taking 16th with a mark of 4.83 meters. Buchanan had a personal best in the triple jump with 11.18 meters for 13th.

The Red Storm is set to travel to Philadelphia for the Penn Relays on April 23.