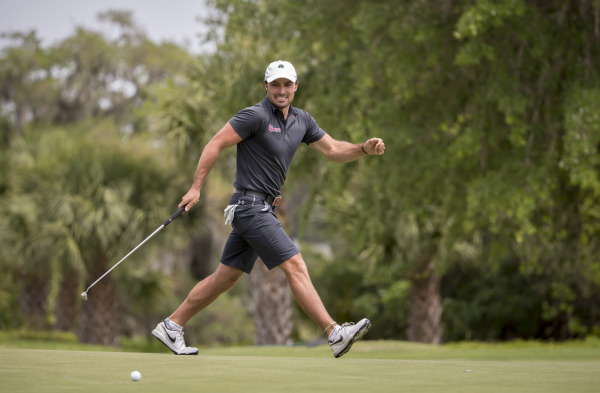 The St. John’s men’s golf team was unable to defend their Big East Championship from last season over the weekend. The team finished tied for seventh place with a combined score of 920 (+56) at the 2015 Big East Men’s Championship at Callawassie Island Golf Course in South Carolina.

The Red Storm finished 23 shots behind the tournament’s champion, Marquette, who finished the third and final day of the tournament on Tuesday, with an impressive 296 combined score.

However, for the second straight season, a St. John’s player took home the tournament’s individual title, with senior Dylan Crowley finishing atop the leaderboard as things wrapped up on Tuesday.

Crowley shot a 215 overall (-1) for the three-day tournament. He saved his best for last, shooting a 71 overall on Tuesday afternoon. He took home the championship after defeating Marquette’s Patrick Sanchez in a three-hole playoff after the two finished tied atop the leader board after 18 holes.

“I worked every bit as hard as I could today,” Crowley told RedStormSports.com after the tournament on Tuesday. “I was able to stay patient and make the putts that I needed to make. It’s just a really exciting day.”

Crowley’s victory this past weekend marked the second straight Red Storm senior to win the conference tournament after Ryan McCormick took home the honors in 2014.

The victory earns him an automatic bid into the NCAA Men’s Golf Championship at the University of South Florida at the end of May where he will compete for a national championship.

Aside from Crowley, another Red Storm player also gave a stellar effort in his final outing of the season. Senior Obe Ayton finished tied for third place in the tournament after he shot a 219 (+3) overall.

Ayton was the model of consistency throughout the three day tournament, shooting a one over par 73 on each day, and finishing tied with Seton Hall’s Lloyd Jefferson Go and DePaul’s Freddy Thomas for third place.

The other three St. John’s players struggled throughout the tournament, with senior John Russo, senior Mitch Hadfield and sophomore Giuseppe Truglio all finishing in the bottom 10 on the leader board.

The seventh place finish over the weekend marks the end of a disappointing season for St. John’s, as they struggled in most tournaments and were unable to record any first place finishes.