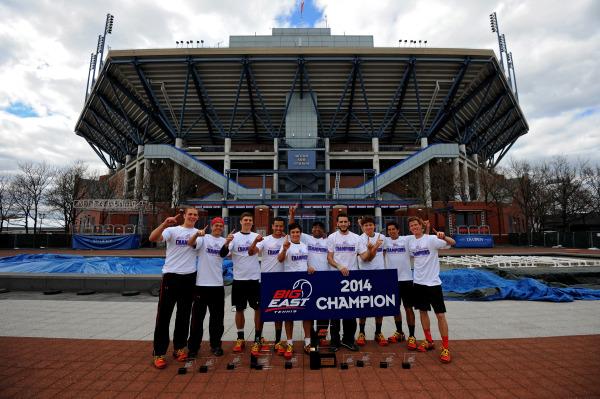 The St. John’s men and women’s tennis teams both finished out their regular seasons with impressive three game winning streaks that helped them gain momentum for a huge event in Indianapolis this past weekend: the Big East Tournament.

Head coach Eric Rebhuhn’s teams kept their confidence going as the men’s squad finished off Marquette to capture their second straight Big East title while the women’s squad made the title match before losing to DePaul (4-0).

In the quarterfinals and semifinals, the men’s unit defeated Villanova and Xavier by a total of seven points, setting up an epic match for an NCAA Tournament berth against the Golden Eagles.

The Red Storm came to play in the doubles portion of the match with Michael-John Every and Robert Livi picking up the first victory and Vaidik Munshaw and Erick Reyes closing out the first portion of the event with a win.

In his singles matchup, Lucas Hejhal defeated his opponent, Daniel Fernandez, before Marquette was able to grab a win to pull within a point.

Reyes was the hero for the Johnnies though, as he secured the championship and an NCAA Tournament berth with a three set victory after trailing early in his match.

On the flip side, the women’s team got out to a quick start in the first two rounds defeating Seton Hall (4-1) and Xavier (4-3). The Red Storm’s win over Xavier was clinched by a marvelous final match from freshman Irina Preotescu (sixth singles).

The women’s team started off the tournament strong against the Pirates, getting an early lead and never relinquishing it thanks to Anna Morozova and Natlaie Vavulina clinching the win with a doubles victory.

The Red Storm had to move on quickly though, and found themselves in a hole in the semis against Xavier. But, the Red Storm fought back. Natalie Vavulina and Anastasia Polyakova put St. John’s in striking stance, while Preotescu was set up for a pressure situation in the championship-settling match that was approaching midnight local time.

Preotescu had a strong showing in the first set against her opponent Daniella Patton (Xavier), going up 6-4, but Patton responded right back by locking up the second set easily, 6-1. In the third and final set, with the winner heading to the championship battle against DePaul, Preotescu was terrific, winning 7-5.

“As soon as I saw the ball go wide, I was so happy,” Preotescu said. “It was a very intense experience and one of the greatest days of my life. I was so excited we won.”

Despite the effort, energy and terrific leadership from the lone senior Polyakova, St. John’s was shut down by DePaul in the Big East final. Irina Preotescu lost 6-2, 6-1 and the Blue Demons closed out the match with a 6-2, 6-3 defeat at the hands of Jaide Collins.