Soccer pioneer reflects on career, life and the World Cup 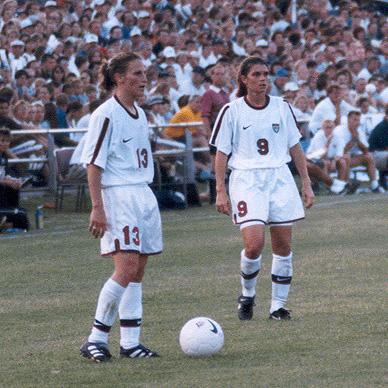 When Kristine Lilly began playing for the United States women’s national soccer team in 1987, the future of her team was far from certain.  The team had only been in existence for two years.

“I didn’t really know anything about it, to be honest with you,” she said.

Two years later, she joined the women’s soccer team at the University of North Carolina.  Lilly recalls getting the call along with her teammates, Julie Foudy, Mia Hamm and Joy Fawcett.

“The four of us got asked to go on the first trip together…but I was 16 years old,” Lilly said.  “I remember saying ‘okay if I want to go on this trip I better check at home first.’”

While she was growing up, Lilly says that there were not many female athletes to look up to.  She names her brother as her number one role model but she says, “My role models were the New York Yankees [and] the New York Jets.  I always thought, ‘oh, maybe I’ll play second base for the Yankees one day.’”

Unbeknownst to her, she would become part of a sports revolution that would allow young girls to have female role models in the game of soccer.

“Girls need to see girls doing stuff,” Lilly said. “If they don’t see it, then they’re not necessarily going to be like ‘Oh, I can do that’ and we want girls to believe that they can do anything.”

Lilly says that playing sports with boys was nothing out of the ordinary for her.

There are many memorable moments in Kristine Lilly’s career, which included 352 international games.

“I remember my first game, being petrified and scared,” she said.

Lilly remembers the series of penalty kicks against China that won the 1999 Women’s World Cup for the United States.

“I think we all felt pretty confident about our kicks and I felt like I was just in the zone.  I remember being nervous, but then I felt even more nervous after my kick because I was nervous for my teammates,” Lilly said.

It was during that same game that Lilly headed the ball away from the goal line, saving the U.S. from a loss.

“There were no thoughts…It happened so fast, there wasn’t even time to think,” Lilly said.

The 1999 World Cup victory was a tremendous accomplishment for Kristine Lilly, but it was an Olympic achievement that she is most fond of.

“Standing on the field after we won in ’99, but also after we won in 2004 in the Olympics.  [That] was a pretty proud moment with Julie and Mia and Brandi and Joy, ‘cause everyone thought that we were too old, that we couldn’t win and we won.”

In 2011, Kristine Lilly retired at the age of 39.  Lilly attributes her success, in part, to family.

“My dad made every single World Cup and Olympic [game] I played in…I think my mom and my brother missed one or two. They are super supportive and that’s something that made my life easier.”

Lilly expressed that the sport has given much to her: many relationships that have lasted even since she hung up her cleats for good.

This giving spirit urged Lilly to create her own soccer academy.  In 1995, she started the Kristine Lilly Soccer Academy as a way to give back to her hometown of Wilton, Conn.  The Academy is now celebrating its 20th year.

“Kristine Lilly is one of those players that only comes around once in a generation,” Tony DiCicco, who coached her on the national team, said.

Kristine Lilly is pleased with the status of women’s soccer today.

“We’ve come a long way. I think we’ve grown in the game… the countries are investing in their women’s teams, as they haven’t before, and teams are getting better,” she said.

Although there has been much progress in the women’s game, Lilly is concerned about the quality of the pitch. Recently, a group of players including Abby Wambach and German goalkeeper Nadine Angerer filed a complaint with the Human Rights Tribunal of Ontario, Canada, claiming that FIFA’s decision to hold the tournament on turf was discriminatory against women.

Now, Kristine Lilly has two daughters of her own, Sidney and Jordan.

Aside from coaching, she enjoys the discussion of her daily activities with her children.

“I wake up early, get my oldest daughter ready for school, get her out the door… go to practice in the morning. My husband takes my other daughter to do fun things,” she said.

Although she doesn’t consider herself to be the greatest cook, her children still look forward to morning breakfast.