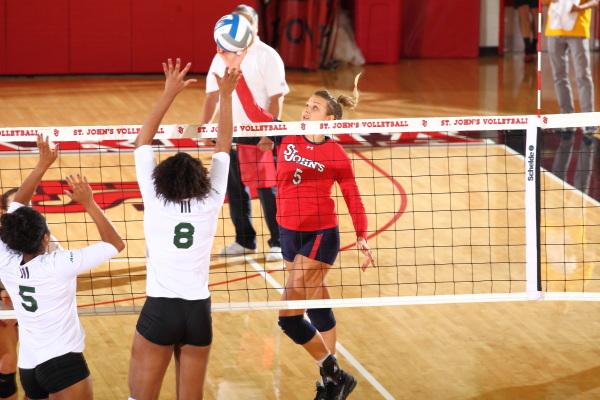 Karin Palgutova has played in an impressive 98 matches and 352 sets in her St. John’s career. (Photo: Athletic Communications)

Transition and change is never easy. But when it comes to St. John’s volleyball player Karin Palgutova, the move from Bratislava, Slovakia to the Big Apple has created tremendous success both on and off the court.

“It was very tough being away from my home country and family, but I am a tougher, more self-sufficient person than I was during my freshman year,” Palgutova said. “I have become much more independent as I have learned to do most things without the help of my parents.”

But, the senior would not be where she is today without the help of her family, in particular, her father who was a volleyball coach and taught her about the sport at an early age.

“He would always bring me to practice and teach me how the game works and how to play,” she said. “I was nine-years-old when I joined my first club team and it was a great experience.”

The development of her game continued throughout high school where she was a four-year letterwinner as a member of Gymnazium Bilikova and also won the Slovakian national championship. She continued to play club volleyball throughout her time in Europe and, when it came time to choose an American college, Palgutova received a strong recommendation from her head coach about St. John’s.

“I heard about the school from conversations with my club coach, but I honestly had no idea where I was going and how St. John’s looked,” the outside hitter said. “I did not come for my official visit, so I only saw the school from pictures.”

“I felt like it was ultimately the right place for me to get an education and play volleyball.”

In her first three years on campus, Palgutova earned three first team All-Big East honors and the senior ranks third all-time in kills, fifth all-time in attacks and eighth all-time in service aces. She has received multiple honorable mentions and already has played 98 matches and 352 sets in her St. John’s career.

While those individual accolades are tremendous honors, one achievement Palgutova has yet to come across is the chance to play on the biggest stage: the NCAA Tournament.

“Since my freshman year, I have been to the Big East Championship only once and we lost our only match to Louisville,” she said. “I would like to make it to the NCAA Tournament in my last season because I’m expecting it to be a special year.”

The 6’2” senior wants to go out on a high note, not with records and awards, but she wants to be the best teammate that she can possibly be before potentially turning professional after graduation.

“I want to make my last couple of months here at St. John’s as enjoyable as possible,” Palgutova said. “I want (my teammates) to get better every day because without them and my coaches, I would not get any of the awards that I have received.”