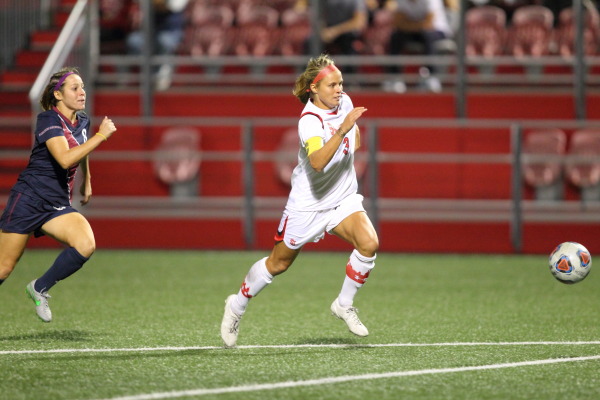 The British invaded Belson Stadium yet again on Sunday night.  St. John’s senior forward Rachel Daly and freshman forward Lucy Whipp, both from across the pond,  provided all of the scoring for the second straight game as the Red Storm defeated the Pirates 3-0 in the Big East opener against Seton Hall. The win gave No. 19 St. John’s a 9-1 record to start the season, its best start in program history.

“It’s interesting because it’s a little bit of a double-edged sword,” St. John’s head coach Ian Stone said. “Obviously we’re very happy that we’ve done the right things in preseason. We’ve done the right things in recruiting, and we’ve got a lot of depth now. And, obviously, I’m going to do the same amount of work whether we win or lose, so the actual winning part of it is satisfying. But, the other part of it is, once you see how talented the team is, you want to make sure they go as far as they can. So, we have to make sure we keep our foot on the gas and we keep preparing as well as we have for the next game.”

Daly’s performance on Sunday was one for the record books, literally, as the senior forward scored twice on the night to tie the St. John’s all-time goal scoring record of 40 career goals. Daly’s first goal in the 26th minute was set up as sophomore forward Shea Connors charged toward the 18-yard box, finding junior midfielder/forward Morgan Tinari streaking to the right side of the Pirates goalie. Tinari let off a rocketing cross towards the net and Daly, seemingly coming out of nowhere, dove and headed the ball into the net for her eighth goal of the season and 39th of her career.  The record-tying and ninth goal of the season for Daly came in the 60th minute as she bolted down the middle of the field past Seton Hall’s defense and  received a perfect pass from Connors before letting off a booming strike from just inside the box and found the back of the net past the outstretched Seton Hall keeper.

“I don’t ever want to tie something; I always want to break it,” Daly said. “To be honest, it doesn’t mean anything until I break it.  Honestly, the numbers don’t really matter to me. We won with a great team effort again. Making a name for myself is great. But, at the end of the day, as long as I can help the team win that’s my main goal.”

“It’s amazing, especially considering that she’s done it in three years,” Stone said. “But, I think there’s so much more to her now than just being a goal scorer. She’s making players around her better. She’s assisting on goals now. She’s just that player that is always making sure our standards are high every day in practice.”

In the 58th minute, Whipp would record her second career goal as she put on an absolute display of athleticism. As she received the ball in the box, she let off a strike, while falling down,  that ricocheted off the left post. Whip would then get up and get her own defection and put it home.

The defensive effort by the Red Storm was nothing short of spectacular. The Pirates were only able to get off three shots the whole night, none of which were on goal, and struggled to even advance the ball past midfield during stretches of the game.

“Defense is a team effort, it comes from the front,” senior defender and Big East Defensive Player of the Week selection Georgia Kearney-Perry said.  “Rachel and the forwards do a great job of it through to the midfield and then we just sweep up at the end. The keepers keep us relaxed and that gives the keepers as little work as possible.”

The Red Storm coaching staff is yet to make a firm decision on who the starting goal keeper is going to be. However it’s a decision they cannot go wrong with, as both graduate student Katie DeVault and junior Diana Poulin have been outstanding all season long.

“There are lots of thoughts going on about the goalkeeping situation,” Stone said. “I think it might depend upon the opponent we are playing. Marquette comes in next Sunday. They are big, tall, and good in the air. That may play into one’s hands more than the other, but I’m not mentioning any names. I really honestly don’t know and I love the fact they are both good. But, I’m going to do whatever that game requires. Katie’s distribution is phenomenal and Diana brings more organization in the second half when the girls may be getting a little tired.”

The Red Storm will next take the field on Thursday as they head to Indianapolis to face Butler to try and continue the historic run they are on.