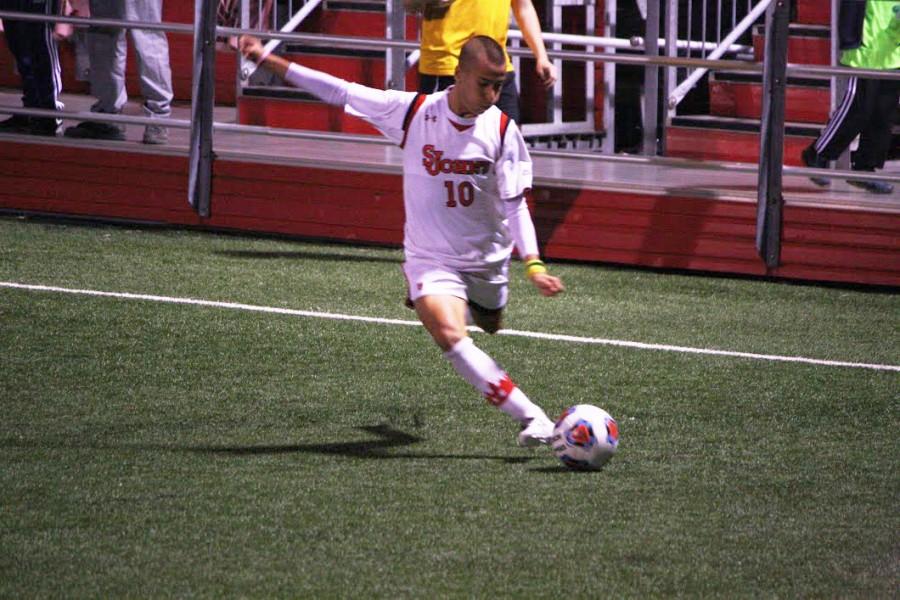 Lucas Fagotti and his teammates finshed off non-conference play strong as the defeated Central Connecticut 3-0 on Tuesday night at Belson Stadium (Photo: Meghan Darreff, The Torch)

The St. John’s men’s soccer team may finally be finding their groove this season heading into Big East play.

The Red Storm kicked off conference play with a matchup against the Marquette Golden Eagles on Saturday night at Belson Stadium.

St. John’s goalkeeper Jordan Stagmiller was active early as Marquette controlled the game’s first few minutes. He hauled in two saves after a pair of Marquette chances in the 9th minute, and also made an impressive save on a free kick in the 27th minute.

The Johnnies were held without a shot for the game’s first 36 minutes, however their first and only shot of the half was a golden scoring opportunity. Freshman midfielder Lucas Fagotti was able to put his defender on skates as he swerved into the box and fired a shot that thundered off the right post, keeping the game scoreless.

Things got going early in the second half, as Marquette appeared to break through for the game’s first goal in the 48th minute. However, a line judge ruled them offsides, negating the goal and preserving the tie.

After a shaky first half, the Red Storm picked up their play as the second half went on. Senior midfielder Luis Esteves had a shot saved after a nice pass in the 66th minute, and three minutes later, the Red Storm narrowly missed scoring on a Marquette own goal.

Time began to run out in regulation of a scoreless game, but each team would have a spectacular chance to score a victory. Stagmiller made a fantastic save in the 87th minute, and Esteves just missed a free kick in the 90th minute, sending the scoreless game into overtime.

The two teams traded blows in each of the two overtime periods, but neither of them could break through. The game ended in a scoreless draw.

“We are lucky enough to have a second season,” Stagmiller said, regarding conference play. “We’re trying to get towards the top six in the Big East, and onwards to the Big East Tournament.”

After a two straight ties, the Johnnies closed out their extended eight-game home stand with their final non-conference matchup of the regular season against Central Connecticut State.

St. John’s was shut out for 110 minutes on Saturday night; however, their offense got going early on Tuesday. In just the 10th minute of the game, sophomore midfielder Adrian Welch delivered a beautiful pass to freshman forward Mike Prosuk, who tapped in the easy goal to make it 1-0 Red Storm.

The Johnnies were back at it 16 minutes later, and for the first time this season they scored multiple goals in a game. Welch continued his impressive night, as he struck a ball into the box that deflected off a defender for an own goal to make it 2-0.

Jordan Stagmiller and the Red Storm defense were solid once again, and Luis Esteves added an insurance goal in the final minute of play as St. John’s recorded their second straight shutout in a 3-0 victory.

“It’s great to get the ball in the back of the net,” Coach Masur said. “We finally got to the end line tonight, and we scored some goals.”

Now at 2-6-2 on the season, the Johnnies will travel to Seton Hall for their next game on Saturday.