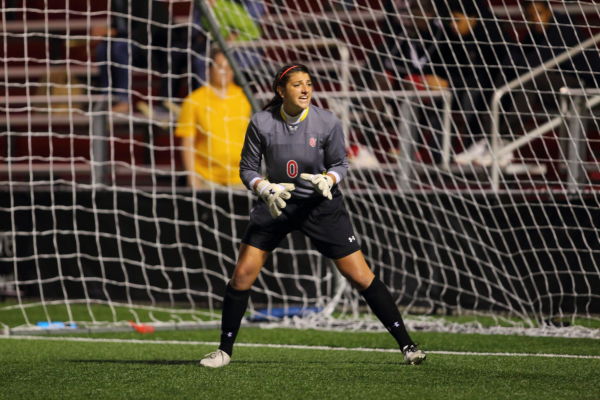 While some would call it a goalie controversey, St. John’s head coach Ian Stone believes it is a blessing to have the luck of coaching two gifted athletes such as Diana Poulin and Katie DeVault.

Stone knew that he needed insurance in net with his star keeper Poulin on the shelf for much of this past spring, so he added another accomplished collegiate netminder in the graduate transfer DeVault.

Poulin was named to the All-Big East First team and was awarded Big East Goalkeeper of the Year last season after posting a 1.07 goals against average and nine shutouts in 20 games. However, it has taken her time to return to that form this year because she spent most of the offseason off the pitch after undergoing surgery on her wrist.

“It’s been tough, because obviously I’ve been out of the game for a while and I haven’t been back and playing on the field or anything,” Poulin said. “I’ve just been taking it day by day, trying to improve little by little to get back to how I was playing last season.”

Luckily, Poulin has been able to form an excellent combination with DeVault, and they have helped the Red Storm get off to their best start in the program’s history.

“When I came here, I knew who I was competing with and what was going on,” DeValt said. “I was able to come in the spring and kind of be a different goalkeeper. We play two different styles. I’m big with distribution at my feet. I think that in practice and in games, we’re pushing each other, because she can teach me a lot and I hope I’m teaching her a lot as well.”

With Poulin needing time to return to her usual high level of play, DeVault has stepped in and has been a helping hand in a 9-1 start and No. 19 ranking (Soccer America) for St. John’s. In 315 minutes, she has allowed zero goals and has recorded six wins.

“I’m having a lot of fun here. It’s a different team, different mentality, that’s for sure,” DeVault said. “But the goal is still the same, zeros on the board and that’s all we can be happy with.”

Overall, St. John’s has been absolutely impossible to score on. The team has allowed just four goals all year, and Poulin and DeVault have combined for seven shutouts.

Rather than deal with a full-blown goalie controversy, Stone has instead used the two as a deadly 1-2 punch in each half of their matches. DeVault has started six games for the Red Storm and has played the entire first half each time with Poulin finishing the victory in the second half.

Of course, the wrist has not been an issue for Poulin recently, as she has allowed just four goals in over 585 total minutes this season. Both keepers view the situation as a healthy challenge, and the two goalkeepers live to push and make each other better with every practice and every game.

“It’s been good, I like competitiveness,” Poulin said. “Katie’s an amazing goalie, so it’s great to have someone working with me, to help push me a little bit more, and everyday I get out there and, me and her, we’re really good together, but we push each other to our next level. So I think it’s great [coach Stone] has pulled her in and it’s definitely helped me try to get to my best and I’ve been trying to help her get to her best as well.”

Their contrasting styles of play have helped their teammates improve their level of play with each game. DeVault has controlled the pace with her ball distribution using her feet, and Poulin regularly brings the intensity and drives possession of the ball to keep her teammates focused in the important closing minutes of each win.

Those styles of play have meshed well with the rest of the team, as they got off to this hot start to the season on four consecutive 1-0 victories. That’s only a testament to how the team has come together and has kept their focus.

“We’re just such a close-knit team,” Poulin said. “We’ve just got to stay together and push through and day-by-day, game-by-game and practice-by-practice improving together.”

The excellent play from both girls has not made this an easy decision for Stone, so he decided to approach each particular game in Big East play by judging how well their styles match up with their opponents.

“There are lots of thoughts going on about the goalkeeping situation,” Stone said. “I honestly really don’t know. I love the fact that both of them are good, so I’m going to do what that particular game requires.”

To be frank, he couldn’t go wrong either way, and this less-than-conventional approach to the situation may be just what the team needs to exceed expectations and really put together a special year.