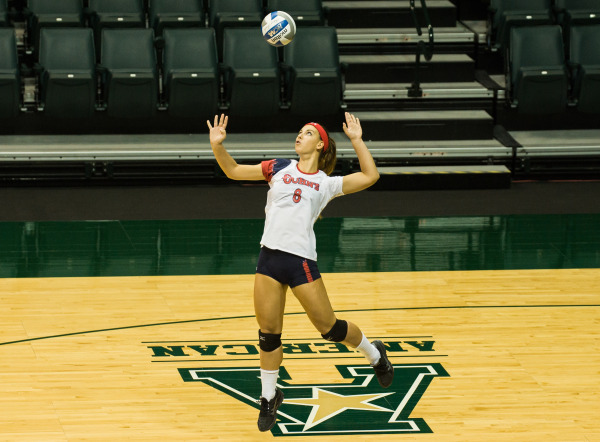 Margherita Bianchin had an impressive match against Butler with 14 kills and 13 digs. (Photo: Athletic Communications)

Margherita Bianchin had a huge game with 14 kills (.345) and 13 digs, which was good for her third double-double of the season. Senior outside hitter Karin Palgutova once again had a superb game with 26 kills (match-high), .293 hitting clip, 13 digs and five blocks. It was Palgutova’s eighth double-double.

Both Delaney D’Amore and Melissa Chin accumulated double-double digs. D’Amore had 13 digs and Chin had 11 digs. D’Amore, Palgutova and Bianchin were tied for the team-high digs.

“Tonight’s match was another fantastic and gutsy performance from our team,” head coach Joanne Persico said. “I’m proud of the way our girls gave it their all, as they do each and every time they step on the court, to win another five set thriller on the road.”

The Xavier Musketeers overcame a 2-0 Red Storm despite a great game by Mutlugil and Bianchin.

Mutlugil had an outstanding game with 57 assists and 16 digs for her fourth double-double of the year and Bianchin finished with 17 kills (.326 hitting percentage) and has recorded 10 or more kills in the past two games.

Palgutova continued her strong play and finished with a team-high 19 kills, .214 hitting clip and nine digs.

The Red Storm Big East home opener and next game will be on Friday, Oct. 2 at 7 p.m. against last year’s Big East champion Creighton (8-7, 2-0 Big East). The home opener will be St. John’s eighth Dig for a Cure match.