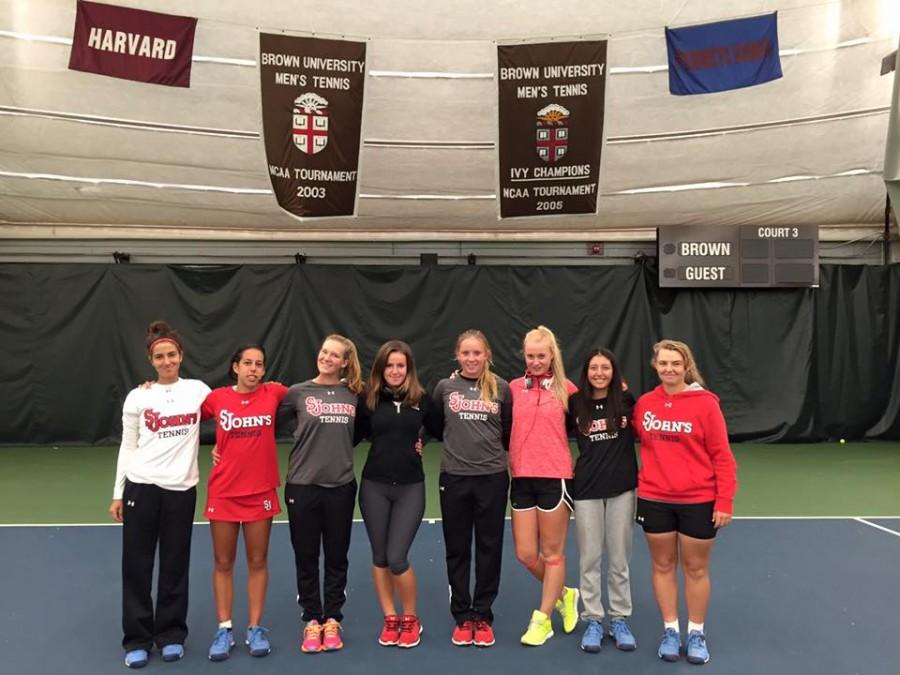 The St. John’s women’s tennis traveled to Rhode Island this past weekend where they came out with an overall record of  18-16 in both singles and doubles  play at the Brown Invitational. There were six Division 1 teams all together at the invite including Brown, UMass, Rutgers, Harvard, Stony Brook and Boston University.

“I’m happy with how we competed this weekend,” head coach Lauren Leo said. “The tournament presented a good opportunity for solid competition and I think our team definitely benefited from this level of competition.”

Sophomore Jaide Collins dominated her second finals appearance of the season with a smooth 3-0  victory in the Black Draw against Farris Cunningham from Rutgers (6-1, 6-1). Along with Collins, sophomore Stephanie Elegren made it to the finals in the singles draw.

Unfortunately, Elgegren was in the lead 2-0 before Yana Nikolaeva from Stony Brook defeated her in the Red Draw finals, which were 6-2, 6-4. Elgegren also made it into second place with freshman Delia Arranz in the Bruno Doubles Draw. On Saturday, they were both 2-0 before falling to Harvard’s players (8-6). The girls finished with a 3-1 record after they achieved a victory in a consolation match on Sunday.

Freshamn Olaya Inclan Solis did well her for her first collegiate season and  took third place in the Crimson Draw, going 2-1 throughout the weekend.

Sophomore Anna Morozova and freshman Irina Preotescu both came in fourth place in the Brown and Maroon Draws. Throughout the weekend, the Red Storm got 13-9 in singles play and 5-7 in doubles play.

With the team being relatively young and inexperienced, the girls are learning the college game together on the fly and will surely have their growing pains as the year progresses. But, with experience, they will mature and have a bright future to look forward to.

The Red Storm will travel to Pennsylvania on Friday, Oct. 2  for the UPenn Invite.