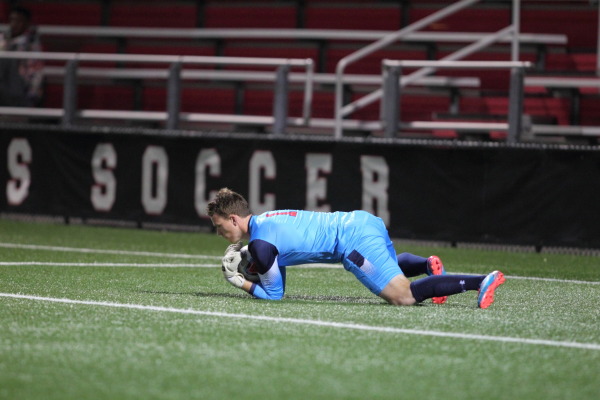 Jordan Stagmiller has recorded a shutout in three-straight matches, garnering him his second straight Big East Goalkeeper of the Week honors.

The St. John’s men’s soccer team continued their solid recent play with a tight victory over Big East rival Seton Hall over the weekend. The victory for the Johnnies was their second straight win, and it pushed their unbeaten streak to four straight games.

St. John’s took to the road for the first time since Aug. 30 after eight straight home games in September, as they made the short drive to South Orange, N.J. to take on the Seton Hall Pirates on Saturday night.

In their second Big East game of the season, the Johnnies came out strong on the defensive side of the ball once again. They allowed just three total shots in the first half, while redshirt senior goalkeeper Jordan Stagmiller wasn’t forced to make a first half save.

However, the Red Storm offense got off to a relatively slow start as well. St. John’s did not have their first real scoring opportunity until the closing moments of the first half, with freshman forward Filippo Ricupati nearly heading in a 44th minute corner kick that was blocked.

The game went into halftime scoreless after the teams combined for just seven total shots in the first half. But, things would begin to pick up early in the second half.

Graduate defender Devin Morgan and freshman forward Mike Prosuk each nearly converted goals early in the half for the Red Storm, but St. John’s would finally break through in the 58th minute.

After a free kick from junior defender Jean Leveille was knocked away by the Seton Hall goalkeeper, senior midfielder Luis Esteves was able to control the rebound and find the back of the net to make it 1-0 St. John’s.

The goal for Esteves was his second of the season and his second in two games after he scored a last-minute goal for the Red Storm in their last game against Central Connecticut State.

After taking the lead on the Esteves goal, St. John’s would continue to control the game in the second half. They held Seton Hall without a shot until the 73rd minute, before Stagmiller was forced to make two saves within four minutes to preserve the one-goal lead.

The Pirates would not threaten again until the closing minutes of the game, but their final free kick went high and St. John’s held on for a 1-0 shutout win.

Stagmiller recorded his third straight shutout with the win, as the Red Storm defense is now pushing on 400 minutes without allowing a goal. They allowed just seven Seton Hall shots throughout the entire game, forcing Stagmiller to make just two saves.

“We saw some promising things tonight on offense,” St. John’s head coach Dave Masur told RedStormSports.com. “We still have to do a better job of finding ways to create and get forward when we’re playing with the lead.”

The Johnnies’ recent success will be put to the test next weekend when they travel to Omaha to take on the nationally top-ranked and undefeated Creighton Blue Jays in their third Big East game of the season.