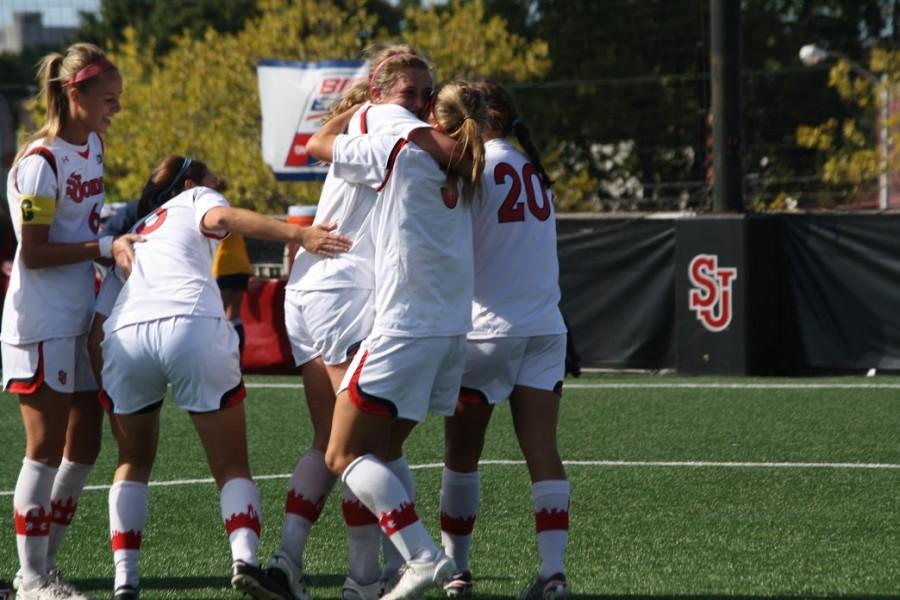 Emily Cubbage celebrating with her teammates after she scored a highlight reel goal in the 66th minute versus Marquette as she headed in a corner kick from junior Morgan Tinari.

The typical weekly story for the St. John’s women’s soccer team has more often than not been Rachel Daly doing something special on the pitch. On Sunday, she had her career-defining highlight.

Daly scored two goals to break the record for most goals and points in school history. More importantly, she led no. 19 St. John’s over Marquette for their seventh straight victory.

The senior from Harrogate, England, passed Adriana Viola (1988-92) in both goals and points with a header in the 34th minute. Shea Connors, one of Daly’s and the team’s most reliable playmakers, had the assist on a cross pass after a corner kick to help break open the story. Daly set the record playing in just 2.5 seasons as a Johnny.

“I’m fortunate to score a lot of the goals and get quite a lot of the credit, but I could not do it without this team,” Daly said. “This team is phenomenal. I couldn’t imagine playing on a team without these girls.”

The two goals were Daly’s 10th and 11th of the season. This was the fourth time in five games in which Daly put up two scores.

“She continues to amaze me. She’s probably the best player I’ve ever had. The other teams know that she’s good and they still can’t stop her,” St. John’s head coach Ian Stone said.

Senior Emily Cubbage scored her second goal of the season in the 66th minute. The way their defense and goalkeeping has been playing, that pretty much iced the game.

St. John’s dominated on the defensive side. They surrendered just two shots in the entire match, highlighted by a leaping, one-handed save by keeper Diana Poulin in the 48th minute. This outstanding effort on defense produced a shutout, the team’s ninth of the season.

“For a back line to get a clean sheet is something and I’m very proud of that, especially against a strong team like Marquette,” senior defender Georgia Kearney-Perry said. “And, to go 14 to 2 in shots is brilliant and we pride ourselves on that. Coach prides himself on a strong defense and we lead from the back. We’re very happy about that.”

For good measure, Daly scored a second goal in the match in the 81st minute to finish a cross pass to the top of the box from junior Morgan Tinari, who had two assists in the game.

“We really look up to her, so it’s really nice to know that someone’s there,” Tinari said of Daly. “Any ball I play, even if it’s a [bad] ball, I know that she’s going to get there and I know she’s either going to finish it or it’s going to be some nice play. It’s nice to have her there.”

St. John’s improved to 11-1 on the season and 3-0 in Big East conference play. The win was their first in 12 matches all-time against Marquette.  The Red Storm is now on a program-record seven-game winning streak.

The Red Storm is now entering their biggest test of the season. Conference matchups at Georgetown, home against Xavier, and on the road at DePaul await them. These games could define their season. But, with the way the team has come together to exceed expectations, they’re confident.

“There’s not one individual on this team; everyone is so together. It does show that,” Daly said. “And, I think it scares teams. We’re 19th in the nation. We got that number on our back, and we play up to that number.”