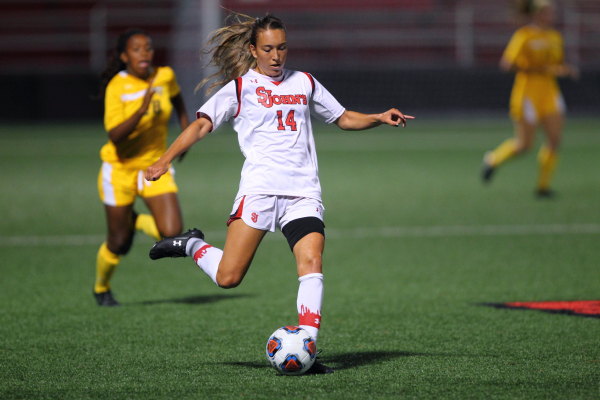 Miranda Haraughty’s goal in the 42nd minute was all the Red Storm needed versus Butler.

A tough match in Indianapolis against Butler was determined by a game-winning goal by Miranda Haraughty as the Red Storm defeated the Bulldogs 1-0.

This win marks the sixth time in program history that the Red Storm has won six straight games. This is also a notable win because it is the earliest that the team has reached double-digit wins.

While speaking on how the team as a whole is able to continuously motivate themselves, head coach Ian Stone stated, “I think that the defeat on Belson against Georgetown in the semifinals on penalty kicks last year is still very fresh in the minds of the players involved. I think there’s a determination and a desire to try and go further this year and that really is the motivating factor.”

Haraughty scored her first goal in nearly two years after missing her entire sophomore year due to injury. She stated that her personal motivating factors are her parents, teammates and coaches. “We are constantly motivating each other to be better and we continue moving in the same direction: forward.”

It was Lucy Whipp’s rebound off of her own initial shot that set up the goal by Haraughty and the 1-0 finish that St. John’s walked away with.

Other key players, Katie DeVault and Diana Poulin managed to keep Butler from scoring. The Red Storm defense made it impossible for any of Butler’s nine attempts to result in scoring.

All eyes were on Rachel Daly, as she is just one goal away from breaking the all-time St. John’s record. Although she tried to score in the opening 10 minutes, Butler’s goalkeeper Madison Card denied both attempts.

“What we tended to do last night too much was force it into Rachel Daly,” coach Stone reflected. “She always wants it. We know how good she is; it’s not always the answer. It was a pretty hostile environment. We need to do better in those circumstances because it got a little frantic, and we weren’t in charge of our emotions.”

The Red Storm will be back home on Sunday afternoon to take on Marquette at Belson Stadium. The game will be shown live on the Big East digital network and will begin at 1 p.m.