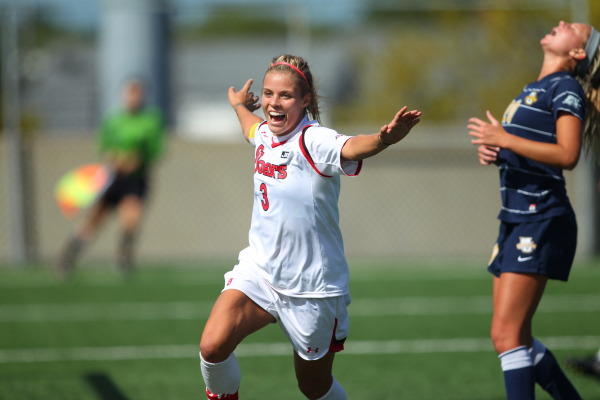 That’s the one word that comes to mind when thinking of what senior forward Rachel Daly has accomplished during her collegiate career at St. John’s.

“She continues to amaze me,” head coach Ian Stone said of Daly. “She’s probably the best player I’ve ever had. The other teams know that she’s good and they still can’t stop her.”

“She has surpassed everything I expected in the U.S. both in her soccer and her education,” Rachel’s father Martyn Daly said. “Her goals, team play and camaraderie are a major source of pride. I think you must also remember that without the likes of Georgia, Emily, Diana [Poulin], Morgan, etc., and of course Ian Stone that she would never have achieved these levels. I am a seriously proud father right now.”

In only two and a half collegiate seasons, the Harrogate, England native has etched her name in the St. John’s record books as the best player to ever step on the pitch for the Red Storm is mind-boggling, but, that is exactly what she has done.

“We really look up to her, so it’s really nice to know that someone’s there,” junior Morgan Tinari said. “Any ball I play, even if it’s a [bad] ball, I know that she’s going to get there and I know she’s either going to finish it or it’s going to be some nice play. It’s nice to have her there.”

“Rachel’s a fantastic player. She can fit into any position, as we saw last week [in our] last game against Butler, she played left-back,” redshirt senior Georgia Kearney-Perry said. “She defends, she attacks. Yeah, she’s brilliant. She’s absolutely brilliant. She scores plenty of goals, which we need. It’s great to have such a versatile player up top who can do everything very, very well.”

On Sunday, at home against Marquette,  Daly was one goal away from breaking the all-time goals and points record in St. John’s history, a record 40 goals and 91 points that was set from 1988-92 by Adriana Viola. In the 34th minute of action on Sunday, the record was broken. Daly would be set up perfectly on a cross by sophomore Shea Connors as she darted into the box and headed the ball past the Marquette keeper. The goal was her 41st of her career and also marked her 92nd career point, both St. John’s all-time records.

“Speaking individually, which I generally don’t like doing, it’s huge. It really is,” Daly said of the record. “It’s a great feeling, especially doing it over two and a half years rather than four. I think for me it’s a great achievement and it’s one of those things I can’t really put into words what it felt like when I scored both of those goals today.”

Within minutes of her breaking Viola’s all-time goals and points record, Daly’s father took to Twitter to express his jubilation on his daughter’s accomplishment. “@StJohnsWSoccer I know she’s my daughter but @RachelDaly3 is a legend.”

“It means the world to me,” Daly said of her father.  “He came to the Butler and Marquette games last year and for him to see me score a couple was his proudest moment. He’s always supported me even when no one else did and he follows me every minute of every day. I can’t wait for him to come out here in a couple of weeks. It’s great to see his support and know he’s watching every game no matter what time it is.”

But, in typical Daly fashion her motor and tenacity didn’t stop after breaking the record in the 34th minute.  The primary team player knew the importance of the game against a Marquette team, a team that is in both the Big East and a team that the Red Storm had never beaten in 12 attempts. After a brilliant goal by senior Emily Cubbage, Daly received a perfect ball from Tinari and found the back of the net for the second time on the day, extending her record to 42 career goals and 94 career points. The Red Storm beat Marquette 3-0 for the first time ever and set a program record with seven straight victories, something Daly was more concerned with than her own accomplishment.

“Oh yeah. Absolutely any day of the week I’d take wins [over individual success],” Daly said. “Obviously for me it’s a great personal achievement. It’s a brilliant achievement for me. I’m not going to dumb it down. But, to just get the win and keep winning is great. I do it for coach. He’s a legend and he deserves it more than anyone.”

Daly’s play versus Marquette also marked the fourth time in five games that she has scored multiple goals, a feat she has reached 14 times in her career. She also recorded her 16th game-winning goal of her career on Sunday as well.

Another aspect of Daly’s game that makes her the player she is, is her versatility on the field. No matter where she is on the field, at forward, midfield or even at defender,  Daly is a dominating presence.

“She’s very, very complete,” Stone said. “Rachel studies soccer. So, Rachel now knows the game inside and out. She’s going to be a phenomenal coach. She can literally play any position on the field. She’s a student of the game.”

During Daly’s first collegiate season, which was her sophomore year because she had to sit out her freshman campaign due to NCAA compliance regulations, she burst upon the seen. No one in the nation, or at least no team that played St. John’s, had an answer for Daly as she put up gaudy offensive numbers. During the 2013 season, Daly rewrote the single season goal and points record with 23 goals and 51 points on the season. The record was previously held by Cristin Burtis in 1994 with 17 goals and 41 points.

“Words cannot express how proud I am of Rachel,” Rachel’s mother Louise Daly said. “All her years of hard work and dedication have paid off making her the player she is today. I feel SJU has helped to bring out the best in Rachel not only as a player but as the lovely young woman she is. It is so reassuring for me as her mum knowing Rachel is so happy with SJU, her teammates and coach Ian Stone.”

Rachel Daly’s collegiate soccer career has been one of epic proportions. She has made spectators jaws drop, she has puzzled opponents and she’s amazed all around her with ability to strive for greatness on the soccer field. The scary thing for her opponents, both now and in the future, is that she’s only going to get better.