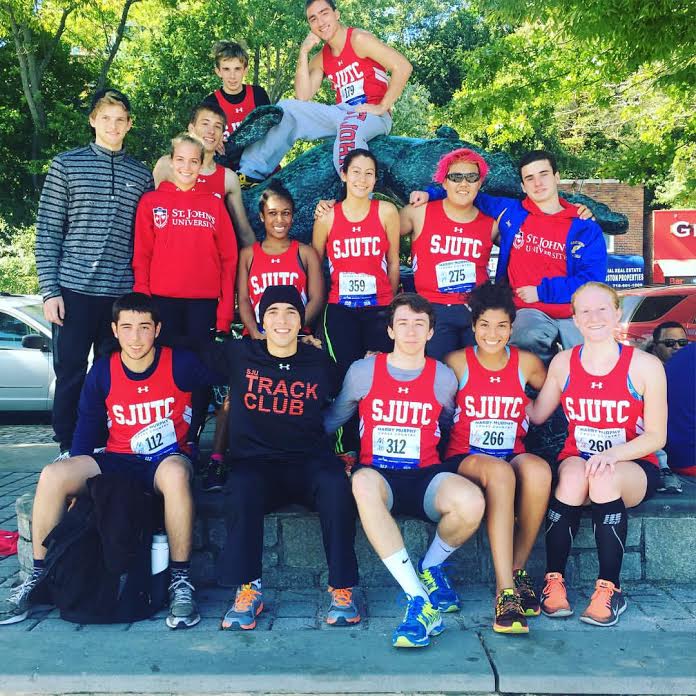 Julia Cast had a career day versus Georgetown as she registered a career-high 17 kills.

On Sunday morning at 11:30 a.m., the starting gun of the New York Road Runners Harry Cross Country 5k fired, and the SJU track club’s racing season officially began. The club competes in road races, invitational competitions and local track meets throughout the school year. This competition served as an opportunity for long-distance runners of the team to gauge how fit they are as they get deeper into racing season and for sprinters to try something new and increase endurance.

Members of the team approached this race with different mentalities and signed up for different reasons. The runners train every weekday in two groups: short distance and long distance. Both groups were represented on Sunday.

Sprinters who participated in the competition included freshman Lillith Ida, sophomore captain CJ Martin and junior Jessica Bernard. All of these athletes aim to improve their stamina for longer distance races. For Ida, this race served as the starting point toward her long-term goal of running a marathon.

Another competitor was Artum Khvan who was a thrower for his high school track and field team. He decided to run after being challenged by a friend to see who would have the fastest time in a 5k race. He ran a 27:07, but fell short of his friend back home. He still had the opportunity to experience the friendly competition and felt good about his time.

Sophomore captain John Fullam cannot resist the thrill of the racing environment. He ran the race with a goal of finishing within the 17 minutes and was very happy with his result of 17:04. Fullam ran cross country in high school and joined the club last fall. “I joined because I love to run, I love to race and I love to be a part of a team,” Fullam said. “I also had no intentions of hanging up my racing flats while I knew that I could still improve and become faster.” He was elected captain at the end of last season and is very enthusiastic about where the team is headed.

All of these runners felt the race went well and were happy with how the season started. The focus of the day seemed to be on how members supported each other, making the club feel more like a team.

Within the past year, the team has seen the most growth, according to Fullam. “Essentially, the club has transformed from a little-heard-of recreational opportunity to a fully-functional track and field team,” Fullam said.

The club started two years ago and was not nearly as big as it is this year. “The club has done a complete 180,” senior captain Keith Mumolo said. “We were lucky if we had ten people showing up every day. Now we have around 40 people attending every practice. We have a much more dedicated group this year with growing numbers and amazing talent.”

At the end of the spring season, the club was able to get funding from Campus Recreation. This was the moment the consistently active members of the team decided to make a plan, or a “constitution” as the captains call it, to better the club. The captains worked during the offseason to brainstorm ideas to bring in numbers and emphasize the team aspect they were all craving. Advertising and having a presence at the fall Activities Fair were key in sparking interest within the student body, according to Mumolo. The team now has over 80 members on the roster.

For runners like sophomore Amy Orellana, the feeling of camaraderie was what made them sign up to be a member. Orellana ran for her high school for three seasons and missed running for a team during her freshman year at St. John’s. After being convinced by a friend to go to the Track Club interest meeting, she was immediately drawn in by the energy of the other interested students. “The first practice I met everyone and I got a good vibe from everyone.”

The team reached a consensus that this was a successful race day and that the season is off to a strong start. Though Mumolo was not registered to run in the race, he elected to come out and cheer the team on at the park. “I had a little bit of a proud parent feeling when the gun went off and I saw a sea of red running as a pack,” Mumolo said. “Everyone ran really well and as soon as they finished, came right around and cheered on the rest of their teammates. I’m getting the team element back again and it feels amazing.”