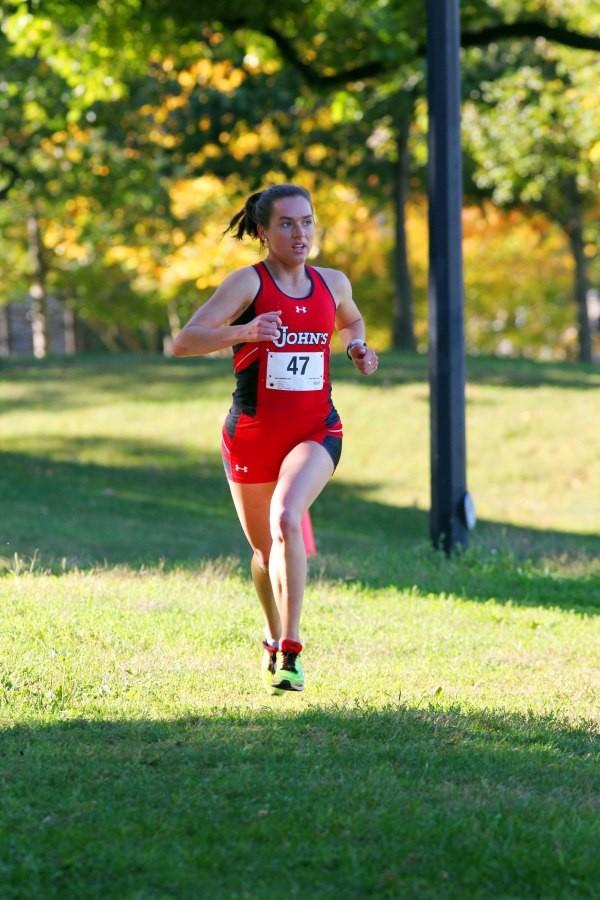 On Oct. 18 at Cunningham Park in Queens, the St. John’s cross country team came in first place at their very own 2015 Red Storm XC Fall Festival. Seven St. John’s runners made it in the top 10 on Sunday morning, with sophomore Izzi Batt-Doyle coming in first with a time of 15:08. The festivities started at the XC Fall Festival at 9:30 a.m. with a fun one-mile breast cancer awareness walk/run, which was teamed up with the program’s annual Olympic Day.

Coach Hurt said, “I was very pleased with our total team effort today as we ran aggressively from the start and stayed close to each other the entire race. Izzi, Stephanie and Ant continue to be a dominant front three. We had Tiffany Evanego run her best race of the year and Claire Mooney looked great in her first race in a year. Melissa, Marlow and our entire long sprint corps get better each week.”

This 4k included teams from Seton Hall, Cheyney and even a few of the St. John’s Running Club’s members. The total time that the Red Storm came in with was 16:01 with Seton Hall just a minute behind on their total standings. Just like they did at the Metropolitan Championships, Batt-Doyle along with freshman Antonia Howard and senior Stephanie Van Pelt came in on top working hard to bring in St. John’s team strong.

Van Pelt’s time was 15:22 and Howard finished the race with a 16:16. Senior Tiffany Evanego came in sixth place with a time of 16:34.  Red Storm runners did excellent as they pushed Seton to second place. “Today’s meet was all about having fun. Today was a 4K and we normally run 5k or 6k so the change was nice. It was a good practice for the Big East Championships at the end of the month,” said Van Pelt.

Taking eighth place was graduate student Claire Mooney who, according to the press release, timed a 16:47 in her very first cross country race of the season. Sophomore Melissa Hidalgo came in with a time of 17:13 for ninth place. As for 10th and 11th places, sophomore Marlow Schulz and senior Michelle Van Pelt came in shoulder to shoulder, running the race besides each other pushing one another the whole way through with a time of 17:22 and 17:23, respectively.

Senior Pariis Garcia did an excellent job considering she has not participated in cross-country in a year, since she is a sprinter for St. John’s track and field, by coming in 20th place with a time of 18:38.

After the races, the program held its luncheon where 40 alumni showed up to remember the accomplishments made in the St. John’s cross-country and track and field programs. Two alumni were specifically honored.  Over this past summer, high jumper Priscilla Frederick from the class of 2012 participated in the Pan American Games in Toronto,  taking a silver medal along with placing 22nd at the World Championships in Beijing, China. Then there was Rodney Wiltshire, who won the gold medal in the 300m hurdles at the World Master’s Championship in Lyon, France. Both of these incredible athletes shared their stories to the current Red Storm runners.

The team is preparing well for their next challenge at the Big East Championships in Ohio on Oct. 30. On how she was preparing for the next meet, Batt-Doyle said, “The Big East Champs will be my first 6km and hopefully the course, weather and the competition there will provide a good race for me in Ohio. Plus, I’ll have my mom watching me! I’m planning to work really hard this week and then start to rest up next week. I’ve been working hard the last couple weeks after coming back from sickness, with quite high mileage (100kms a week) and some great workouts for example, 15x400m on the track last Wednesday. Next week will be all about staying sharp but getting my legs fresh, doing lots of recovery treatment, positive visualization and getting lots of sleep!”