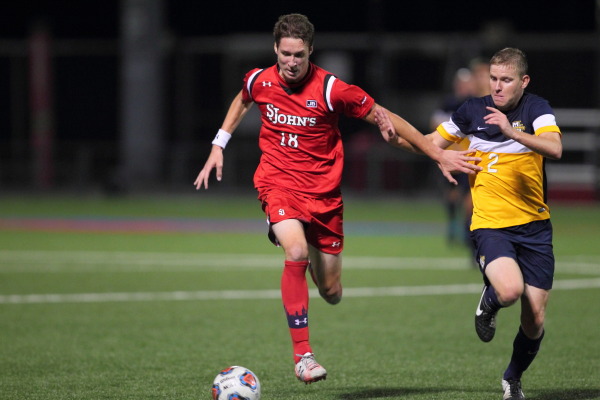 The St. John’s men’s soccer team continued play this week with a pair of Big East matchups against Xavier and Georgetown.

The Red Storm got their week started with their first home game in over two weeks against the Xavier Musketeers on Wednesday night.

Midfielder Marti Tapia nearly got the Red Storm on the board with a header in the 15th minute, before he was turned away by an acrobatic one-handed save by Xavier goalkeeper Dallas Jaye. Tapia was back at it seven minutes later off a free kick but was once again denied by Jaye.

As the Johnnies controlled much of the first half, redshirt senior goalkeeper Jordan Stagmiller didn’t face a shot until the 37th minute. Ultimately, the game would go into halftime scoreless.

St. John’s had the first opportunity of the second half, and it would be a golden one. In the 62nd minute, Xavier’s Jaye made another outstanding save off a header, while a defender at the goal line denied the subsequent Red Storm shot. The ball ended up in the goal after a few chaotic seconds, but St. John’s was ultimately ruled offsides.

The Red Storm continued to dominate the final 30 minutes of regulation; however, the Musketeer defense remained stingy and the scoreless game would head into overtime.

Aside from one Xavier push near the end of the second overtime, neither team threatened to score, and the game ended in a scoreless draw.

“Tonight, I was glad to see that we came out with a first-class effort as opposed to being a little sullen off the game at Creighton,” head coach Dave Masur said.

“We’ve got to keep battling forward, we’re a young team, we’ve got to learn how to keep continuing to fight,” Masur continued.

Following the draw on Wednesday night, the Johnnies took to the road for a Saturday night matchup against the Butler Bulldogs.

The Red Storm controlled the pace of play early, pressuring the Butler defense and holding the Bulldogs without a shot until the game’s 29th minute.

From that point on, the St. John’s defense struggled, and Butler pressured Jordan Stagmiller with seven shots in the half’s final 16 minutes. However, Stagmiller was able to make four solid saves to send the scoreless game into halftime.

The Bulldogs would continue their attack into the second half, and in the 49th minute they would find the game’s first goal. A Butler shot from just outside the 18-yard box beat Stagmiller inside the right post to make it 1-0.