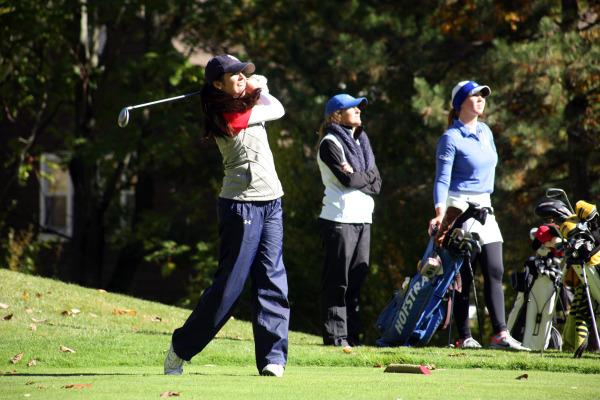 The St. John’s women’s golf team hosted their fourth annual St. John’s Women Invitational at the Saint Andrew’s Golf Club on Monday and Tuesday, finishing in second place behind Hofstra by one stroke. Senior Anna Kim took home her second career individual title after scoring a 72 in back-to -back rounds. “Anna had a great week and played very solid the last two days. She really stepped up, showing her leadership and was able to pull away with a dominating victory,” head coach Ambry Bishop said.

After day one of the tournament, the Red Storm was tied for second place with Hofstra, both down 11 strokes to Quinnipiac. Senior Anna Kim led the individual leaderboard on the first day with a score of 72. At the end of Monday, St. John’s had three other players in the top 25, including Saskia Sterud tied at 20th with 89 (+17), Kristy Beckwith tied for 10th shooting an 84 (+12) and Lydia Kim tied for 23rd scoring 91 (+19). Head coach Ambry Bishop still had hope for her team after the first day telling RedStormSports.com, “We did not play as strong today as a team like we have in practice. We have to carry our strong practice skills to the course tomorrow as we are looking to bounce back and finish the fall season on a high note.”

On Tuesday, the Red Storm was able to pull ahead of Quinnipiac with a total score of 662 (+86), but fell behind one stroke to Hofstra. St. John’s had two other players finish in the top 25 along with Kim. Kristy Beckwith tied for fifth place with a score of 78 and a total of 162 (+18) and Saskia Sterud tied for 11th place shooting 79 with a total of 168 (+24). “It was nice to see Kristy and Saskia get back on track today. Along with Anna they were big contributors to the team today, but unfortunately we still came up one shot short.”

This marks the last game of the season for the Red Storm. Bishop is looking forward to the off-season, stating, “We have a lot of work to do in the off season. We have a team that can be very successful. We just have to work on our mental preparation and course management to have better success in the spring.”