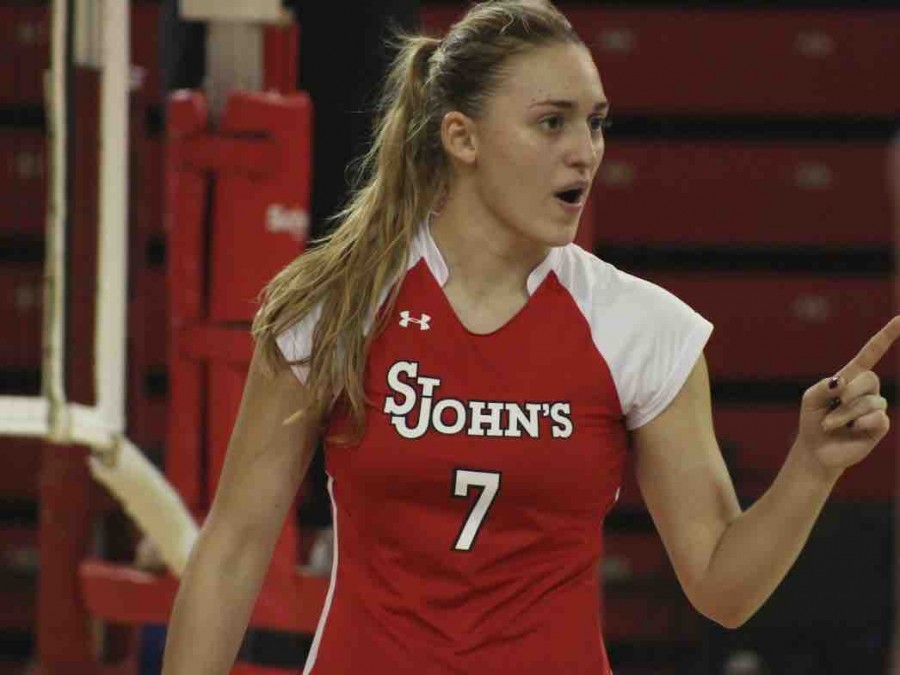 Deniz Mutlugil has supplanted herself among the greatest to ever step on the floor for the Red Storm as she ranks fourth all-time in assists. (Photo: Diana Colapietro/Photo Editor)

Moving away from home for college is difficult for most students. Moving five thousand miles to play a Division I sport is unquestionably difficult.

Mutlugil, currently a senior on the Red Storm squad is cherishing every game left in her illustrious career where she’s considered one of St. John’s most dominant setters.

Mutlugil ranks fourth all-time in assists with 3,281. During her junior year season, she led the Big East and ranked top 50 in the NCAA in assists per set (10.85.)

Five thousand miles away from her family and friends, Mutlugil relies on her teammates for motivation.

“For me, I would say my motivation is my teammates,” Mutlugil said. “After some time, they start to become your sisters, not just teammates.”

When competing in a Big East conference with so much parity the camaraderie between teammates is vital. Especially when just seven games separate the number one seed team from the fifth seeded team.

“Big East teams this year are all so close to each other,” Mutlugil said. “The first-ranked team can lose to the last-ranked team, it’s so competitive.”

The Red Storm has five conference games left in the season, including regular-season finale against second-ranked Villanova (11-2).

“No matter what, we definitely want to go to the Big East Tournament.”

Mutlugil did not always plan to play volleyball in college. Her first love was swimming.

“I was swimming competitively for six years,” Mutlugil said. “I had gold medals and actually thought that I was in a good place with swimming. But, it turned out another way.”

The inspiration to pursue playing collegiate volleyball stems from her parents.

“My mom and dad were professional volleyball players,” Mutlugil said. “Deep down, I knew that they would love it if their daughter were to play volleyball.”

“I started playing volleyball when I was nine-years-old. When I was 12, I signed with a club team and I played there for six years.”

Mutulgil’s desire to study and play abroad began during her senior year of high school.

“My English was really good by my senior year of high school,” Mutlugil said. “I took all my high school classes in English so it wasn’t that bad.”

With a little help from her old club coach, and the head coach at the University of Florida, the lefty setter from Turkey was beginning to get interest from U.S. college coaches.

The first coach to contact her was St. John’s head coach Joanne Persico.

“JoJo was the first one to reply back, saying that she would love to meet with me.”

Several Skype sessions later, coach Persico sold Mutlugil on St. John’s. “And then, I just found myself here in the summer of 2012.”

Mutlugil didn’t just step outside her comfort zone. She leaped outside of it.

But four seasons later and the Turkey native has made New York her second home. Mutlugil plans to pursue an internship or job opportunity in New York post-graduation.

“I want to stay here and get some job experience,” Mutlgil said. “Then we’ll see what happens.”