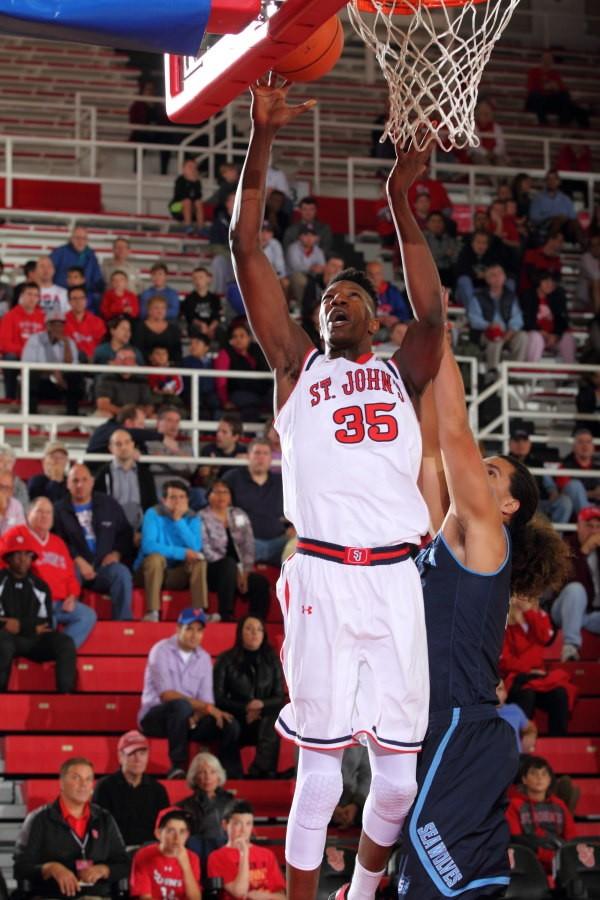 Yankuba Sima displayed why he was a coveted recruit as he scored 16 points to go along with 16 rebounds and eight blocked shots in the Red Storm’s 64-46 exhibition win over Sonoma State. (Photo: St. John's Athletic Communications)

.For the last couple of seasons, it has been a block party every time St. John’s took the court at Carnesecca Arena and Madison Square Garden. Even with a new cast, it doesn’t look like that’s going to change.

Freshman big man Yankuba Sima held one of those block parties on Saturday. He swatted eight shot attempts away and also scored 16 points and 16 rebounds in a 64-46 victory over Sonoma State that served as a last tune-up before Friday’s season opener against Wagner.

“I feel good. I just give my best. I did everything I could do to help the team win; that’s it,” Sima said. “I hope to try to do it every day, every game.”

The 6’11” big man from Spain was one of new head coach Chris Mullin’s big prizes during his recruiting tour this summer. He was a top-15 recruit at the center position.

Sima’s size and athleticism make him a force on both sides of the court. He showed it Saturday, and he’s ready for it to carry over into the regular season.

“I think it builds our confidence so we aren’t nervous in the first [regular-season] game,” Sima said. “These [exhibitions] will help us going forward.”

He was a perfect 6-for-6 from the free throw line with a smooth shot unusual for a big man, which shows how complete his game can be.

“Today I improved my free throws, thank you to my coaches, because they help me.”

Sima showed he could follow in the footsteps of Chris Obekpa, who shattered school and NCAA records blocking shots in his three seasons at St. John’s before transferring to UNLV this year.

St. John’s controlled much of this game. They used a 10-0 run to end the first half and build a 14-point lead. They went on a 13-2 to ice the game in the final seven minutes.

The performance was an improvement after a 32-point loss in the previous exhibition against St. Thomas Aquinas. Coach Chris Mullin was pleased with the team’s resiliency through adversity.

“Sports are a great metaphor for life. Sometimes you learn more from losses and tough times than you do with good times,” Mullin said. “I wouldn’t go through the [last game] again but, to me, it’s more how you react to things like that than what happens. You assess it, you don’t run from it, you claim it and you try to do something about it.”

St. John’s only shot 36.2 percent from the field and turned the ball over 18 times, five by freshmen Federico Mussini. They got it done primarily at the line, as they were 29-of-34 on free throws.

The overall effort on defense was noticeably better from Wednesday’s game, as they held Sonoma State to 22.4 percent shooting. The Seawolves were just 13-of-58 from the field.

“I thought we had two really good practices that were very intense. One focused on defense, one focused on offense and the carryover was there,” Mullin said. “I am pleased with how we bounced back. We put good work in [practice] and were able to transfer some of that into a game situation.”

Redshirt junior Christian Jones added a double-double of his own with 13 points and 11 rebounds. He also added two steals and went 7-of-9 from the free throw line.

Jones is one of the three returning lettermen for St. John’s, and is looking to have a breakout season and help freshmen like Mussini and Sima establish themselves into the program more comfortably

“Being that I’m a junior, I want to be a leader for these guys because that’s what I had when I was coming in. Most of the freshmen and sophomore players hit walls and it’s hard for them to transition into league play.”

St. John’s opens the regular season at 6 p.m. Friday against Wagner at Carnesecca Arena. You can catch the game on Fox Sports 1.