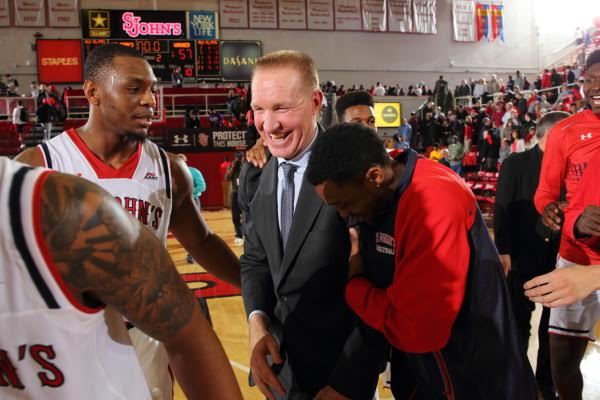 Chris Mullin won his long-awaited coaching debut with thanks in part to his international recruiting class.

Freshmen Federico Mussini and Yankuba Sima, two of Mullin’s top gets this summer, led St. John’s to a 66-57 victory over Wagner on Friday at Carnesecca Arena. Mussini scored 18 points on 6-of-11 shootings and Sima scored eight points, eight rebounds and three assists.

The Red Storm (1-0) got the job done through a tried and true formula for basketball success: defense and shooting. They held Wagner to 31.7 percent (19-of-60) shooting and shot 9-of-20 from three-point range. Mussini hit four of those three-pointers.

Mussini will be the primary handler of the ball with Marcus LoVett ruled ineligible for the season. He struggled in exhibition play, but he looked confident this time and got the jitters out of the way. He credited his teammates for moving the ball well to find him open for threes.

“Every time I have a bad game, I know that I have to work harder. So, this week, I focused on taking every practice as if it was a game. I still have confidence in my shot and I know when I’m open I have to take it,” Mussini said.

After the team struggled in exhibition play, these are the kind of results Mullin was happy with in the postgame, as it capped his emotional day.

Following the win, Mullin was shown on television and the jumbo-tron embracing his old coach from when he played at St. John’s, Lou Carnesecca. The two remain close and “Looie” remains supportive as Mullin takes his turn as head coach of the Johnnies.

“First thing [coach Carnesecca] said to me is that I look sharp, but it won’t last. Soon my shirt will be hanging out and my tie will be undone. He’s had such an influence on my life. Just like when I was 10 years old, he guided me [today]. It was a blessing to have him here and it’s been a blessing to have him in my life for the past 42 years.”

St. John’s closed a tight game out in the final six minutes with a 13-7 run on defense and free-throw shooting. The Red Storm held Wagner to 1-of-9 from the field in the last 6:20. Johnson was a perfect 6-for-6 from the line to ice the victory.

“For the most part, I think we played hard defensively and that’s where it starts. The offense is not going to be pretty every night, but defense wins games. That’s what we say in the huddle before we come out. As long as we handle it on the defensive end, the offense will take care of itself,” Johnson said.

Japhet Kadji silenced the lively Carnesecca crowd with a three to cut St. John’s lead to three, but Mussini hit a three of his own to put the game out of reach with 1:15 left.

The performance made Mullin seem more relaxed and confident and it’s just what they needed with the exhibition struggles and key NCAA ineligibility issues.

St. John’s continues its homestand with a match in the Gavitt Tip-Off Games against old Big East rival Rutgers. Then, it’s off to Maui to take on even tougher competition.