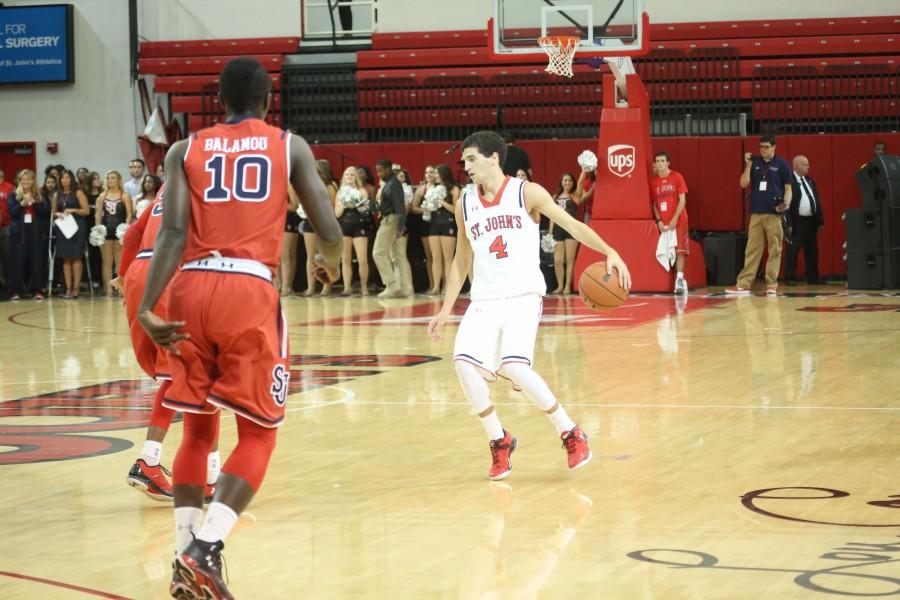 After notching a victory to open up the Chris Mullin era in Queens on Friday night, the St. John’s men’s basketball team returned to Carnesecca Arena to blow past the UMBC Retrievers, 75-53, on Monday.

Monday’s game would serve as an opening round matchup of the 2015 Maui Invitational, as the Red Storm (2-0)will travel to Hawaii next week for the tournament’s championship round to face some of the nation’s top competition.

The Johnnies opponent on Monday night, however, was far from that. UMBC is coming off a 4-24 record last season, and was selected to finish seventh in the nine-team America East in the conference’s Preseason Coaches Poll.

Early on, the young Red Storm looked like they would make short work of the mid-major squad. St. John’s knocked down seven of their first 13 shots to surge to an early 18-8 lead within the game’s first ten minutes.

The Red Storm would continue its strong shooting as the half progressed; however they were unable to pull away, in part due to 10 first half turnovers and they would head to the break with a 31-22 lead.

As the second half got going, the Retrievers would hit five of their first six shots to cut the St. John’s lead down to 37-34 with just under 16 minutes left to play. However, graduate student forward Durand Johnson would keep the Red Storm afloat, scoring eight of their first 10 points to begin the second half.

A 15-6 run from that point on, fueled by Johnson, Mussini and graduate student forward Ron Mvouika, would put the Red Storm ahead 52-40, leading to a UMBC time out with just under nine minutes left to stop the momentum.

St. John’s would lead by as many as 15 in the ensuing minutes. However, timely shooting by the Retrievers would continue to keep them within striking distance down the stretch.

But, similar to Friday night against Wagner, the Red Storm did a nice job closing this one out. They would power past UMBC in the game’s closing minutes for a 75-53 win, improving their record to 2-0 on the young season.

Mussini would end up leading the way for St. John’s for the second straight game with 18 points on five of 10 shooting and six assists. Mvouika added 16 points as well, while Johnson would score all of his 15 points on the night in the second half.

The pair of graduate students, along with senior Christian Jones (seven points and seven rebounds), were a big part of the strong Red Storm second half.

“DJ and Ron were big time tonight,” said Mullin postgame. “They played like the leaders that we needed them to be, I’m happy for them…and we need them.”

Next up for St. John’s will be a showdown with Rutgers at Carnesecca Arena on Thursday night in the first installment of the annual Gavitt Games.