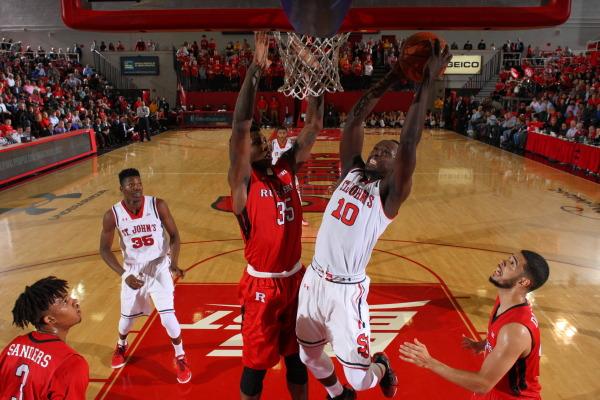 In his first game following reinstatement by the NCAA, Felix Balamou was a huge impact in St. John's comeback win over Rutgers (Photo: Athletic Communications)

Felix Balamou returned, and made a difference in a comeback victory for the Red Storm.

Balamou, who was reinstated by the NCAA just hours before tipoff, had eight points to go with a team-high 11 rebounds and seven assists to help St. John’s overcome a 16-point deficit to defeat old Big East rival Rutgers, 61-59 on Thursday night at Carnesecca Arena.

“I’m humble thanks to my teammates, coaches and everybody at St. John’s that has helped me throughout this process,” said Balamou. “I was mentally down, but St. John’s is a family. It meant a lot to me. So today I just went out there and played [my game].”

Down by as many as 16 midway through the second half, the Red Storm used strong defense and clutch shooting to pull out the win over their former Big East rivals and move to 3-0 on the young season.

“It was a total team effort. [Rutgers] is a big, physical, strong, athletic team. We told our team we had to rebound, which we did. Our turnovers were at 15, which is the right direction for us. Our defense is ahead of our offense. I thought we hung in there, stayed positive and gave ourselves a shot.”

In the early moments of the first half, things looked eerily similar to the low- scoring, physical games that the old Big East was so well known for. Neither team shot the ball exceptionally well to open things up. Then Rutgers began to find their stroke and the Johnnies couldn’t buy a basket.

St. John’s shot just 28 percent (9-32) in the half  missed 12 straight shots at one point, which fueled the Scarlet Knights on a 12-0 run to give them a 19-9 lead with six minutes remaining in the period.

The Red Storm eventually picked up their shooting and cut into the Rutgers lead, but the Scarlet Knights still held a 33-26 advantage at halftime behind 14 points off the bench by Bishop Daniels.

Rutgers went on a 7-0 run in the first two minutes of the second half to extend their t lead to 40-26, as St. John’s continued to shoot poorly and turn the ball over.

The resilient Johnnies had a run of their own up their sleeves, as a 20-10 St. John’s run midway through the half would cut the Rutgers lead down to just five, 52-47, with seven minutes remaining.

“[Mullin told us to] calm down,” Balamou said. “The game is going to come to us. Execute and stick to our fundamentals and we should be fine.”

The Red Storm cut the Rutgers lead at three for a brief moment in the following minutes, however the Scarlet Knights would hold that five-point lead, 58-53, at the under-four media timeout.

Mussini, the Red Storm’s leading scorer on the young season, wasn’t about to let his team go down quietly. His five straight points tied things up at 58 with 2:34 left to play.

Things remained tight down the stretch, as St. John’s held a 60-59 lead with 17.6 seconds remaining. However from there, junior guard Felix Balamou missed a pair of free throws, leaving Rutgers with the ball and a chance to win.

The Red Storm defense the came up huge in the final seconds. Felix Balamou forced a turnover by Corey Sanders (although he may have gotten away with a tripping foul). Christian Jones drew a foul trying to ice the game with a layup, but had to settle for 1-of-2 free throws at the line went to the line with six seconds left.

The Red Storm had a 61-59 lead, and Rutgers could not get a shot off on their final possession as St. John’s held on for the dramatic win.

“I just stayed focused on the defensive end. [I knew] we would not win the game on the offensive end so I locked up on defense and tried to block everything. I gave it 100 percent on every possession,” Sima said.

Next up for Mullin and the Red Storm will be an even bigger challenge, a trip to Hawaii to play in the 2015 Maui Invitational next week against teams like Vanderbilt, Indiana and Wake Forest. The team has made progress in their development as a team, and rather quickly.

“We’re focusing on each day, each film session, each shoot around, each practice to get better. We talk about [progression all the time], but more importantly we’re doing it. We have goals each four minutes that we want to accomplish, and if we don’t we try to fix it. Our timeouts are really focused on keeping a positive attitude.”