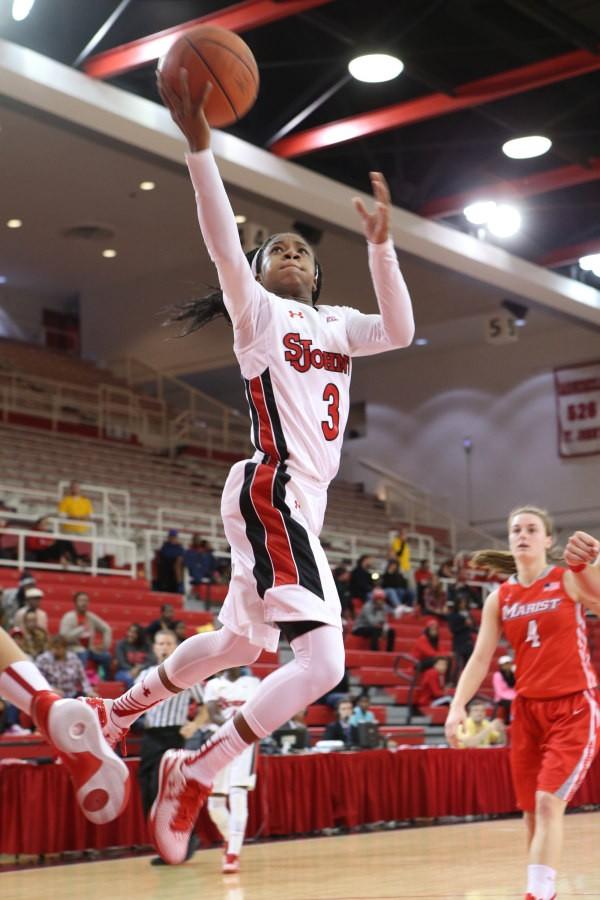 Aliyyah Handford lead St. John's with 19 points, 8 rebounds, and 5 assists to lead the Red Storm to a win in their home opener.

It’s been awhile since the St. John’s Women’s Basketball team had some home cooking.

They last played at Carnesecca Arena in March, where they defeated Fordham to advance to the Sweet 16 of the WNIT. After a 2-1 road trip and opened this season with three straight road games, the Red Storm powered past Marist 61-47, picking up their third straight victory Sunday night.

“Coming back home pumped us up,” senior Aliyyah Handford said.

On a night where they couldn’t gain any consistency with the ball, as shown by a 39 percent field goal shooting, St. John’s wreaked havoc defensively, forcing 18 Marist turnovers and holding the Red Foxes to a 30.9 field goal percentage from the floor.

“There are a number of things to build upon from today’s performance, but I thought our team really grinded it out,” Head Coach Joe Tartamella said. “The last couple of games we shot well from outside and today we struggled, but we showed that we can still find a way to win when the ball isn’t going into the basket from outside.”

Three St. John’s players ended up with double-digit points, a product of not being able to rely on one shooter and their fast-paced, pass-first style of offense on display tonight. Handford, the BIG EAST Preseason Player of the Year, had a game-high 19 points, followed closely by fellow senior Danejah Grant with 17 and Jade Walker with 13.

Handford and Grant also led with eight rebounds, and the All-American Handford dished out a game-high five assists.

The key to their success on defense aggressiveness and the ability to get into passing lanes. Handford and fellow guards Tamesha Alexander and Aaliyah Lewis interfered on passes all night long, creating chances ton the fast break after defensive rebounds.

Marist took advantage of the aggressiveness of the Red Storm defense at first. They used the over-pursuit to feed the ball inside and draw fouls, and they shoot 10 free throws in the first half and kept their deficit to St. John’s no more than 10 for most of the half.

In the end, St. John’s wore the Red Foxes down and Marist faded away quickly in the second half. They attempted just two free throws in the second half and scored just eight points in the paint. The Red Storm also held Marist to just 17 percent from three-point range, including missing 10 straight misses.

Coach Joe Tartamella praised his team’s willingness to rely on their defensive skills. “We’ve put our calling card on the defensive side over a number of years,” Tartamella said, adding that “[the team] wants to score,” but it’s impossible to shoot well every night.

For as well as they played on defense, the Red Storm did not shoot the ball particularly well, especially in the second half. They shot just under 30 percent in the final two quarters, but they still lead by as much as 20 points in the middle of the fourth quarter to go on to win.

The high point for the St. John’s offense was on the fast break. The Red Storm scored 10 fast break points and 21 off of turnovers, showing how they used their defensive fire to fuel their offense when the scoring unit couldn’t click on its own. They also scored 30 points in the paint to Marist’s 22.

Having gone 3-1 to open the season, Red Storm looks to continue their early season surge. After this homecoming, they’ll play three of four games at Carnesecca, including their next game against USF on November 29th.

“I’m pleased with the effort and obviously now we have to move forward to the next game and get ready for South Florida,” Tartamella said.