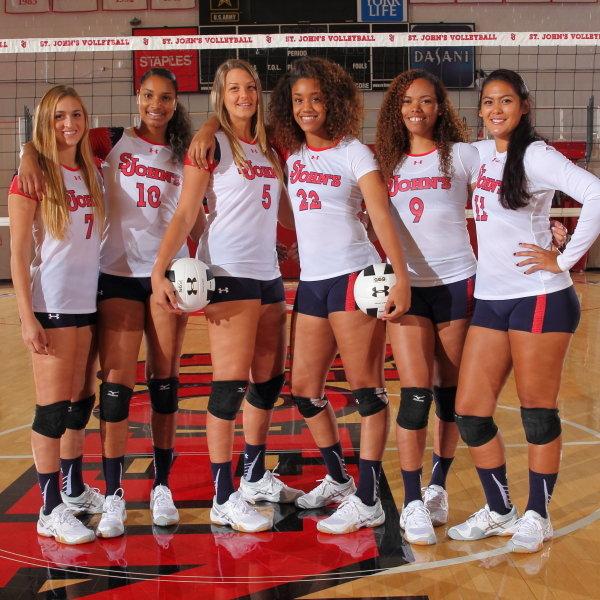 The St. John’s women volleyball team wrapped up their regular season with a pair of road losses to Seton Hall and Villanova the weekend before Thanksgiving.

St. John’s did not qualify for the BIG EAST Tournament, so their season ended with the pair of losses to Seton Hall and Villanova.

Seniors Karin Palgutova and Yadiy Santiago each had double-doubles in the loss. Palgutova had her 14th  of the season with 13 kills and 15 digs, Santiago had her fifth with 14 kills and 17 digs. Shawna-Lei Santos tallied 38 assists and nine digs.

The sophomore duo of Julia Cast and Delaney D’Amore also had a strong showing in defeat. Cast had nine kills, six blocks, and one error. D’Amore came away with 20 digs, seven assists and one service ace.

The Red Storm finished the season with an overall record of 18-15 (8-10 in the BIG EAST) following the loss to Villanova. The Wildcats are now 24-7 (14-4) in the BIG EAST and locked up the second seed for the BIG EAST Volleyball Tournament.

Senior Yaidy Santiago had a game-high 12 kills in the loss with a .259 hitting percentage. She finished the season third on the team in kills per set with a 2.46 mark and fourth in digs per set with 1.96.

Senior Karin Palgutova concluded her established career as a Johnny as the all-time leader in kills, attacks, and service aces. She led the team in kills with 465, kills per set 3.84, and aces with 24. For the game, Palgutova had nine kills and seven digs.

Senior setter Deniz Mutlugil collected three assists and one dig and finish her career fourth on the all-time assists list. She was team leader in assists with 774 (9.33 aps) for the season.