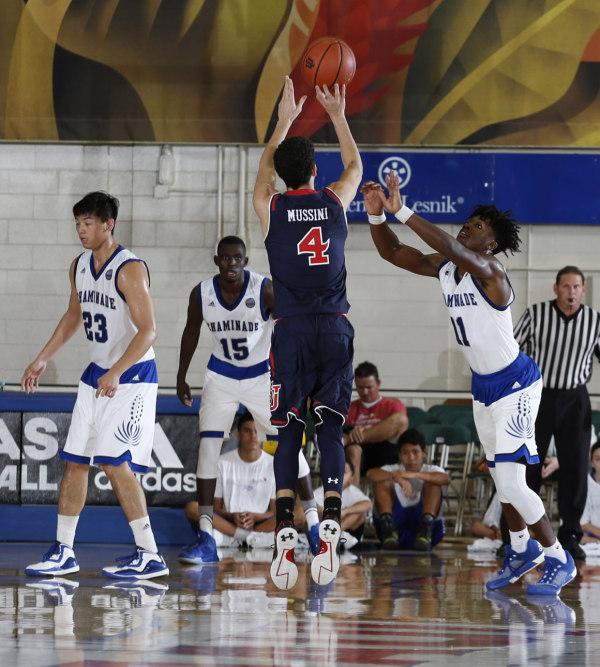 The good, the bad and the ugly of the Red Storm were on display in Hawaii, where they went 1-2 at the annual Maui Jim Maui Invitational during Thanksgiving Week.

St. John’s took a pair of tough losses to two Top 25 teams in Vanderbilt and Indiana before defeating Chaminade to finish seventh in the eight-team tournament.

“Obviously, a win makes the long flight home a little more bearable and enjoyable. It was important to be able to bounce back like we did and respond to adversity,” head coach Chris Mullin said.

St. John’s showed that they can score with some of the better teams in the country, but the defense had their share of struggles as they gave up 90 points in the three games.

On offense, they showed some positive signs. Freshman Federico Mussini continued to carry the load for the Red Storm in Hawaii, as he led the team in points in each matchup and topped it off with a 24-point, 6-assist performance against Chaminade to salvage the road trip.

“It’s really important [to leave Maui with a win]. [There is a] difference between 3-3 and 4-2,” Mussini said. “We lost against two really good teams, but we improved every day since we’ve got here and that’s the important thing.”

In Monday’s opener, St. John’s was completely overwhelmed, as No. 19 Vanderbilt jumped out to a 29-5 lead in the first 10 minutes and coasted to a 92-55 victory.

The Commodores shot 53.3 percent from the field and connected on 12 three-pointers, Their size was also too much for the Red Storm, as they outrebounded St. John’s 49-26.

“We have to learn from it,” Mullin said.

The Johnnies fared much better on Tuesday against No. 13 Indiana, as the Hoosiers had to pull away with an 83-73 victory after St. John’s gave them a challenge.

Mussini and graduate student Ron Mvouika each scored 17 points, and senior Felix Balamou had 14, as they tried to rally from a 17-point deficit. They managed to get within four in the middle of the second half, but it wasn’t enough.

Indiana’s depth was too much for them. Led by senior Yogi Farrell’s 22 points and Thomas Bryant’s 19, the Hoosiers shot 57.7 percent from the field, including 8-of-19 from three.

St. John’s bounced back Wednesday and left Maui with a victory and a seventh place finish after beating Chaminade in a shootout, 100-93.

The Johnnies had their best offensive performance of the year, as they shot 59.3 percent from the field and connected on 10-of-19 shots from behind the arc. Mussini had five of those 10 threes. Durand Johnson and Amar Alibegovic, who had 18 and 17 total points respectively, had two threes apiece. Three other plays also scored in double digits.

“Everybody on the team knows to shoot when they’re open so it’s just about confidence. Sometimes, shots don’t go in, but we have to keep shooting and [keep] believing in ourselves,” Mussini said.

St. John’s jumped out to an early 15-3 and closed out the half up by 17 after three-pointers by Mussini and Alibegovic in the closing seconds.

The Red Storm still struggled on defense, as Chaminade shot 50.7 percent from the field and 13-of-29 from three. Nevertheless, they never got closer to St. John’s than seven, and the Red Storm was able to hang on.

After a pair of ugly losses in the first two days, it was important for the Johnnies to leave with a win. 4-2 looks a lot better than 3-3.

“I think, after the first night, we took a step [in the right direction], and [Wednesday] we were rewarded for that,” Mullin said.

St. John’s plays its first game back in New York Wednesday at Fordham, before they tip off their first Madison Square Garden game of the season on Sunday against St. Francis (Brooklyn).