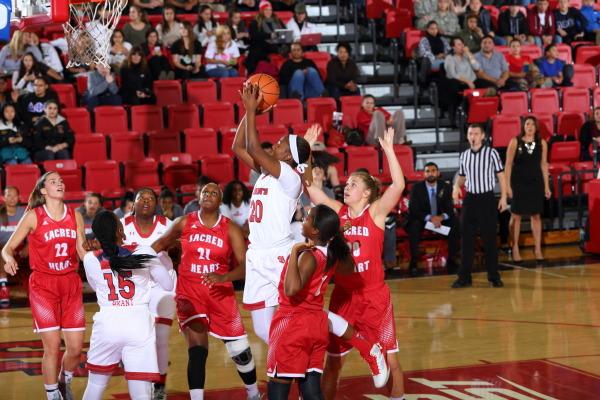 Freshman Akina Wellere had a breakout performance with 17 points in a St. John's victory against Sacred Heart (Photo: Athletic Communications)

It was a tale of two halves for the St. John’s Women’s Basketball team Thursday night.

In the first half of their game against Sacred Heart, they played with a lack of intensity, but turned it on in the second half by creating turnovers. They were able to fight their way to their fifth consecutive win, a 67-54 victory at Carnesecca Arena.

St. John’s shot just 34 percent from the field in the first half, and surrendered 5-of-11 three-pointers, but later used 25 total turnovers in the game to push past the Pioneers.

“We played at their level, and we know we’re better than that,” senior guard Aliyyah Handford said.

Once St. John’s got out of foul trouble early on, they focused their defensive efforts on causing those turnovers. Sacred Heart already came into the game averaging 17.2 per game. St. John’s totaled 10 steals and had 22 points off turnovers that kept the game tight throughout.

The teams battled back and forth for much of the first half. The lead changed 11 times, as Sacred Heart hit five threes and St. John’s battled in the paint offensively, scoring 43 points there for the game. Senior Danaejah Grant hit a jumper with less than a minute left in the half to pull St. John’s to within one.

“We were able to keep our ground and keep the game close,” coach Joe Tartamella said.

The play that sparked the Red Storm’s turnaround was a technical foul called on Grant late in the third quarter. The foul light a fire under the team offensively, and Handford went to work. She dropped 24, including six straight points and some acrobatic finishes at the end of the third to turn a 48-44 deficit into a 50-44 lead. The BIG EAST Preseason Player of the Year also added five rebounds and four assists.

In the second half alone, St. John’s forced Sacred Heart into committing 14 turnovers, eight on steals.

St. John’s also got a huge contribution from freshman Akina Wellere, who had a career-high 17 points in 32 minutes of action.

“I’m always comfortable, and I made sure my energy was higher today,” Wellere said.

After totaling just 23 points on the year in, it was a breakout performance for Wellere, and she was able to provide a tertiary option behind the usual stars, Grant and Handford, and she provided three three-pointers five rebounds.

“It was great to have contributions from Akina from the outside,” Tartamella said.

The Red Storm looks to continue their superb play on Sunday, as they will travel to Allen Fieldhouse to play Kansas.