St. John’s Falls at Fordham in First True Road Game of the Year 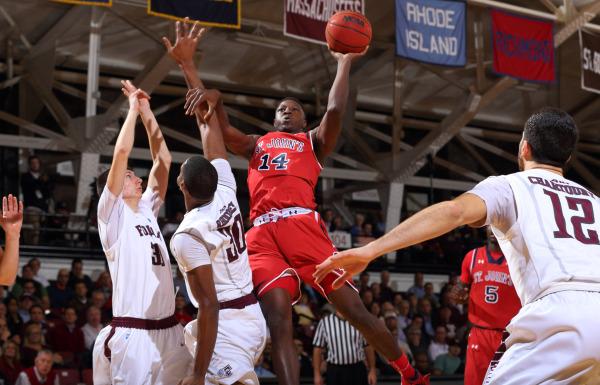 In the team’s first true road game of the season, St. John’s was dominated from start to finish by Fordham at Rose Hill Gymnasium in the Bronx Wednesday night.

Point guard Federico Mussini’s struggles were the difference in the game. The Italian native scored just five points on 2-of-9 shooting and turned the ball over five times, struggling mightily with the Rams pressure trap defense. St. John’s committed 19 turnovers in total.

“The turnovers (19 in total) came into play and I think we got rattled,” Chris Mullin said following the loss. “To me, and we’ve talked about it a lot, turnovers are a big key for us, taking care of the ball, and giving up 16 offensive rebounds hurt us.”

Rhoomes scored 26 points and was unstoppable on the glass, grabbing nine of the 16 offensive rebounds, and showed his physical style of play in the post in the second frame against Sima and Jones.

Mullin’s squad also failed to defend the three-point line, giving Fordham seven threes including five in the first half, and the Red Storm received no momentum from their own long-range shots (only two threes). They shot 40 percent from the floor overall and 72 percent from the free throw strike but the Rams knocked home 26 field goals on 15 assists. Mandell Thomas and Jon Severe both scored 14 points to support Rhoomes’ 26.

The Johnnies were shell-shocked for the opening minutes, turning the ball over several times and forcing shots instead of having consistent ball movement. The inexperience and inability to handle Fordham’s intensity helped the Rams jump out to a quick 6-0 lead, which ballooned to 25-17 when Thomas knocked home a three with 7:55 remaining in the first half.

While Mussini and Sima had a rough go in their first college road game, freshman forward Kassoum Yakwe showed massive potential in his highly anticipated debut. Yakwe scored nine points on 2-of-5 shooting and grabbed three rebounds in 18 minutes off the bench. He also showed off his incredible length and impressive leaping talents as he blocked one shot and altered a few others.