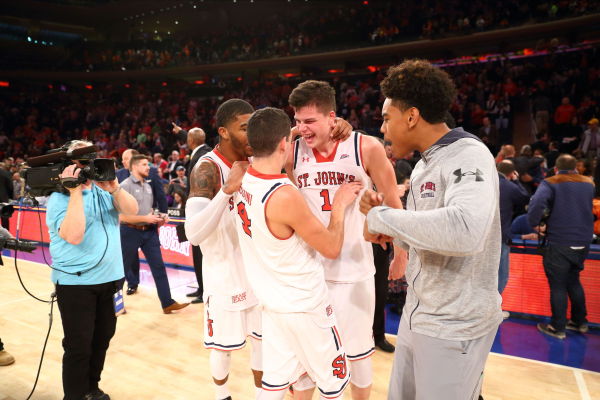 It was a familiar stage with some less familiar faces, and a result that is starting to become more familiar.

St. John’s and Syracuse met for the 90th time in their history, and the Johnnies defeated their old Big East rival for the second straight year, 84-72.

As usual, the crowd at Madison Square Garden was divided between the colors red and orange. The Johnnies won MSG and the game over the ‘Cuse minus Jim Boeheim.

Sophomore Amar Alibegovic, who played just four minutes in St. John’s win at the Carrier Dome last December, was the shining star at the Garden on Sunday. He had 15 points on 5-of-6 shooting, his second double-digit scoring performance of the season.

“It’s been some time since I’ve played like this, and it’s all just coming out at once. It was just pure adrenaline,” Alibegovic said. “I’ve been given the opportunity, and I’, starting to take advantage. I have to keep it up.”

Taking advantage of his size against Syracuse’s famous 2-3 zone defense, Alibegovic knocked down three three-pointers that stretched St. John’s lead to double digits late in the first half.

“I just started from the defensive end and tried to do the basic things” Alibegovic said. “The zone gave me the opportunity for offensive rebounds and to shoot the ball. I was able to knock it down.”

Federico Mussini also continued his own emergence as a star for St. John’s. He scored 17 points and three assists, hitting five of St. John’s 12 three-pointers on the game. He was also crucial in moving the ball against Syracuse’s zone, and he played more confident than he has all season.

“I still have confidence in my shots. I know when I’m open I have to keep shooting,” Mussini said.

St. John’s built a nine-point lead toward the end of the first half, and Syracuse never came closer than seven. St. John’s had an answer for every Syracuse basket, and they held the Orange to under 36 percent shooting.

“I thought we did a good job fighting in transition, not letting them get their half court offense going and adding up transition baskets and transition threes.” St. John’s head coach Chris Mullin said.

After scoring just 48 points Wednesday against Niagara, St. John’s offense was much improved Sunday, as they shot 50 percent from the field.

“We just had a great week of practice. Everybody bought in, we all played hard,” Johnson said. “We wanted to protect our home. We came out and played hard.”

The victory was a signature one for St. John’s, as this young and inexperienced team continues the process they’ve set forth on since Mullin arrived in April.

“I truly believe that this team can keep getting better. So, something like this is truly important, probably more for them because it shows them that there’s more there,” Mullin said. “We have to do it together, of course.”

The game was the 90th all-time meeting between St. John’s and Syracuse, and it was the first matchup between Red and Orange without ‘Cuse head coach Jim Boeheim since December 1975. Boeheim is currently serving a nine-game suspension as a result of Syracuse’s NCAA academic violations.

Chris Mullin will have to wait until next year to face against the Hall of Fame coach for the first time since his playing days at St. John’s.

“I’ve got tremendous respect for Jim Boeheim. We all do at St. John’s. He’s one of Coach [Lou] Carnsecca’s favorite guys,” Mullin said. “[Boeheim]’s longevity and success speak for itself. I’ve always enjoyed him off the court, his humility, such a good guy.”