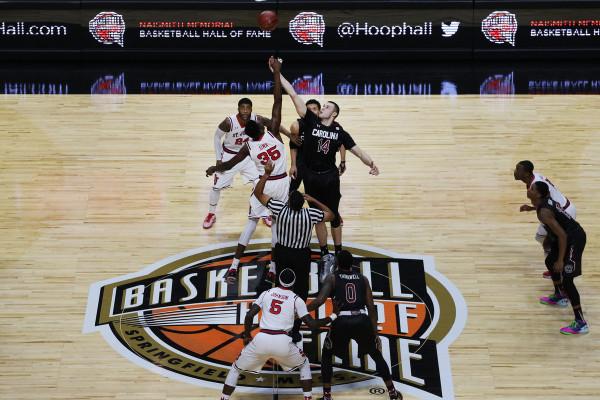 After a disastrous weekend that consisted of losses to Incarnate Word and NJIT, the St. John’s men’s basketball team (7-6) showed more fire, passion and energy on Tuesday night at Mohegan Sun in a loss, 75-61, to No. 25 South Carolina.

“(The effort level) is something we have been talking about,” head coach Chris Mullin said following the game. “We have been emphasizing it. Most of our guys have thirteen college games under their belt and they are learning what the really good teams do.”

Three Johnnies scored in double figures with Durand Johnson, 16 points on 6-of-12 shooting, leading the way. The team’s top scorer coming in, Federico Mussini, dropped 12 points on 5-of-14 shooting. Christian Jones shot an efficient 5-of-6 from the field and added 10 points as Yankuba Sima battled foul trouble, scoring seven points in 27 minutes of action.

With Mussini having to deal with the long freshman, P.J. Dozier, and South Carolina’s pressure defense, many would have expected this to be a long night for a team that has struggled mightily to take care of the ball. Instead, the Red Storm only committed 14 turnovers (three less than the Gamecocks), had 11 assists on 22 field goals and shot 45 percent from the floor.

But with less talent than their opponent, weak play on the glass (out-rebounded 43-26) and poor free throw shooting (44 percent), the Johnnies couldn’t edge out one of the five remaining unbeaten teams in America.

“We have a group of good guys,” Johnson said. “We all played with energy tonight and we played real hard but give credit to that team. They are one of the best teams in the country so we have to keep building and keep improving.”

The Gamecocks used their usual balance to shoot 47 percent from all areas of the floor and 54 percent from beyond the arc. Duane Notice led South Carolina with 20 points off the bench while the versatile Michael Carrera added 16 points on 6-of-10 shooting along with 12 rebounds.

In the first half, the Johnnies came out of the gates with a desperation that was not found in their last two defeats at Carnesecca Arena. They got out to a quick 9-4 lead and had the upper hand through the first three media timeouts.

Then Notice took over, pouring it on with jump shots from the perimeter and buckets in transition. Notice scored 14 of his 20 points in the first stanza, including five straight with less than three minutes remaining until the break to put the Gamecocks up by double digits.

St. John’s kept the game within reaching distance (40-34 at halftime) thanks to Johnson’s fearlessness on the perimeter and the team’s ability to find a way to get to the free throw line.

A slow start in the second frame ended the Johnnies hopes of pulling off the upset, as they were unable to creep closer than seven points following the quick 10-3 South Carolina run. Mullin’s team continued to attack the basket and take advantage of the Gamecock’s hand checking on the perimeter, but they were unable to knock down their freebees from the line. At one point, Jones, Malik Ellison and Ron Mvouika missed a combined five straight free throws, before Sima’s make drew a sarcastic cheer from the pro-St. John’s crowd.

Next up for the Red Storm is the start of Big East Conference play, as the Johnnies will face off against Creighton at Carnesecca Arena on New Year’s Eve.