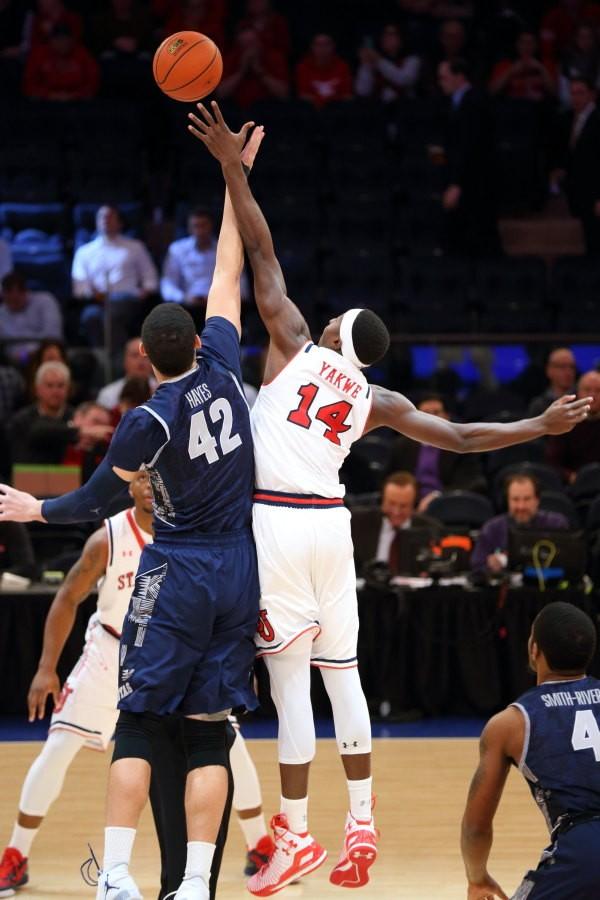 Despite losing their first four Big East games, the St. John’s men’s basketball team showed grit and toughness, as they were competitive against Creighton, Providence, Xavier and Marquette. But on Wednesday night at Madison Square Garden, the rails fell off early with the Georgetown Hoyas crushing the Johnnies, 93-73, in a game the road team led from start to finish.

“(Georgetown) came out tonight and played hard,” graduate transfer Durand Johnson said following the game. “We came out sleep walking to tell you the truth.”

That lack of energy quickly put the Johnnies in a 17-11 hole at the under 16 media timeout. Guard D’Vauntes Smith-Rivera, who had a career high 33 points, and sharp shooter, Reggie Cameron, exposed the Red Storm’s perimeter defense while Chris Mullin’s team could not buy a bucket on the offensive end due to poor shot selection.

Ron Mvouika led St. John’s in scoring with 15 points, but he scored most of his points when the game was out of reach and took zero shot attempts in the opening half. Amar Alibegovic was one of the lone bright spots as the sophomore put up 12 points and grabbed four boards while Kassoum Yakwe, five points and eight rebounds, had another solid game.

The Red Storm only turned the ball over 14 times and limited Hoyas senior Bradley Hayes and sophomore Isaac Copeland to six total rebounds. But the Johnnies shot 39 percent from all areas of the floor, 39 percent from three and struggled to get into a rhythm without a true post presence in Yankuba Sima.

Georgetown was efficient on offense, finishing with a true shooting percentage of 52 while they hit 10 threes and hit 27-of-33 free throws.

“I thought tonight we were mentally and physically fatigue,” Chris Mullin said. “That’s what I saw. I thought they were a step slow, not really focused on the details we were prepared for.”

Regardless of the 20-point loss and the lack of intensity that failed to uplift the crowd at the World’s Most Famous Arena, the team will have to regroup with multiple challenges coming in the coming weeks.

“It’s a process,” Ron Mvouika said. “I still have hope and faith in my guys. I still think we’re going to play our best basketball towards the end. We keep grinding every game.”