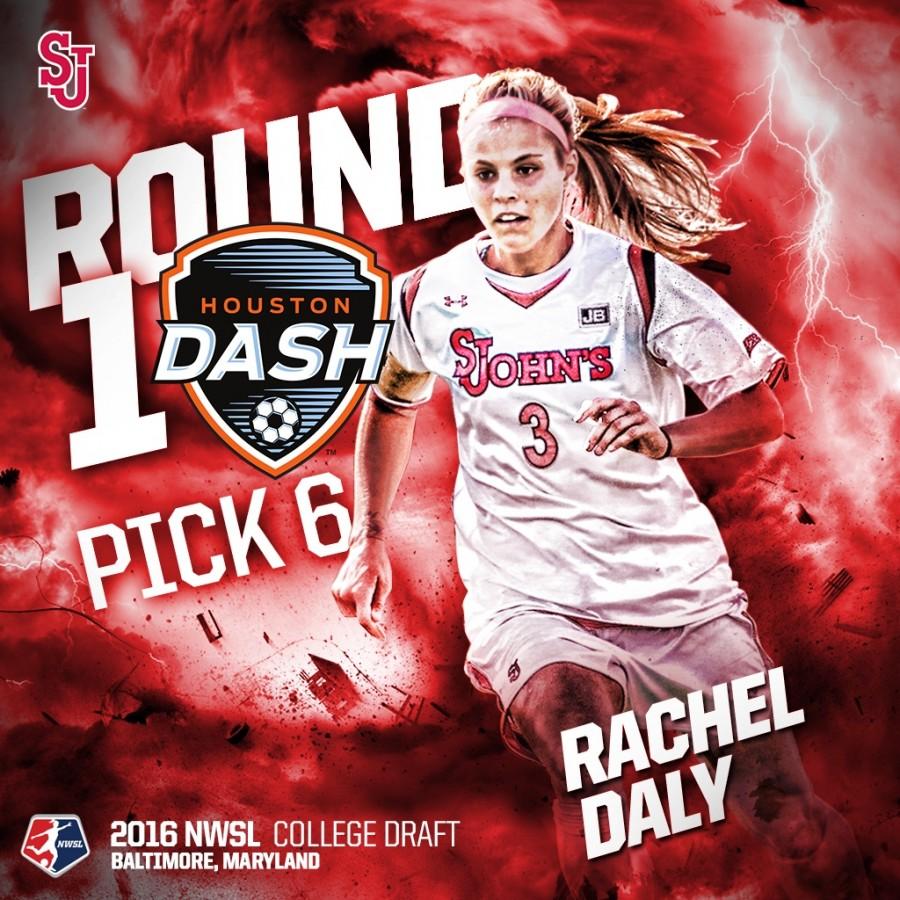 Making history seems to run through the blood of Rachel Daly.

On Jan. 15, the St. John’s senior forward yet again etched her name in the soccer history books, both at St. John’s and in the National Women’s Soccer League (NWSL). The Harrogate, England native became the first St. John’s player ever selected in the NWSL College Draft as the Houston Dash selected her in the first round with the sixth pick. The selection of Daly by the Dash marked the first time an English-born player was selected in the draft.

“It’s been a dream for her for the last four or five years to play in this league,” St. John’s head coach Ian Stone told the Queens Chronicle. “There’s a great deal of hunger there. She has much more of a hunger and a desire than some of the other girls. She’s ready to be a professional.”

“We are going to play her up front,” Dash head coach Randy Waldrum said of Daly. “Now, with getting her and Beckie in the draft, this will give us an opportunity to tweak our three-front system. We could play her as a target along with two wing players. We could play her with a two-front and have someone play underneath, or we can play her out wide on the wing. So, I think she can give us the flexibility; but, right now, in what we have, we will play her right out as our target player.”

Daly’s selection as a top overall pick in the 2016 NWSL Draft seemed destined to happen after her legendary career as a member of the Red Storm.

In 2015, the senior captain helped lead the Johnnies to the best season in school history. On the way to a record breaking 15-win campaign, the first ever Big East regular season title in program history and hosting the program’s first ever NCAA Tournament game, Daly shattered the St. John’s career goals and points record. In only three seasons, Daly scored 50 goals and racked up 111 points.  This past season, she also became the first player in program history to earn an NSCAA All-America First Team selection.

During the senior forward’s illustrious collegiate career, she garnered three selections to the All-Big East First Team and won Big East Offensive Player of the Year honors in 2013 and 2015.

Daly was also a standout in the classroom as a two-time member of the NSCAA Scholar All-America Team and CoSIDA Academic All-America team selection in 2015.

“She is highly competitive; she doesn’t like losing in anything,” Waldrum told Our Game Magazine. “She works her butt off in training every day. And, talking to Ian Stone about her, he just raved about the fact that sometimes it gets to a point where she gets frustrated where people aren’t working hard enough. And, that’s a mentality that a good striker needs. She is not afraid of throwing her body against a goalkeeper or against a defender to fight to win a ball and the opportunity to score a goal.”