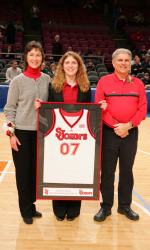 On Jan. 20, Kathryn Smith became a trailblazer for women all over the sports world as she became the first full-time female coach in National Football League (NFL) history as she was named special teams quality control coach for the Buffalo Bills. A St. John’s alum, Smith started her journey in the sports industry as a four-year student manager for the St. John’s men’s basketball team before graduating in 2007.

“I don’t want to downplay it, but, at the same time, I don’t really know,” Smith said on WGR-Radio (Buffalo) on Thursday night. “We have Kim Pegula as an owner here. That’s as big as it gets really. Maybe we’re getting more recognition, but there’s definitely a lot of women holding pretty important roles. I have an entry-level position.”

Smith is in her 14th year working in the NFL. She spent 12 years working for the New York Jets before following former Jets and current Buffalo Bills head coach Rex Ryan to Buffalo in 2015.

“Kathryn Smith has done an outstanding job in the seven years that she has worked with our staff,” Buffalo Bills head coach Rex Ryan said in a statement. “She certainly deserves this promotion based on her knowledge and strong commitment, just to name a couple of her outstanding qualities, and I just know she’s going to do a great job serving in the role of Quality Control-Special Teams.”

She began her career in the NFL in 2003 as a game day intern for the Jets. She rose up the ranks as she was named college-scouting intern for two years before being named player personnel assistant after her graduation in 2007.

While Smith was a student manager for the Red Storm, she worked alongside another former manager that became a success in the coaching ranks: current St. John’s assistant Matt Abdelmassih.

“It’s not one of those jobs where you get the pat on the back,” Abdelmassih said of Smith to the Associated Press. “When she was a manager, it was her work ethic. She just got the job done. You knew she was going to be successful with whatever she did. To get that call, to be a pioneer, is something special. And, I know it’s just the start for her in terms of working up the coaching ranks. There’s no question that she’ll continue to grow.”

Smith, a native New Yorker, grew up outside of Syracuse in DeWitt. In high school, she was a three-sport athlete in swimming, lacrosse and bowling at Christian Brothers Academy.

“That’s just her nature that, whatever she’s doing, she’s certainly going to jump in head first,” Christian Brothers athletic director John Wleklinski told the Associated Press. “She goes from being someone hard-working, doing the right stuff, to all of a sudden being the answer to a trivia question. And, it couldn’t happen to a nicer person.”