Littleton: A rare mix of size, speed and athleticism 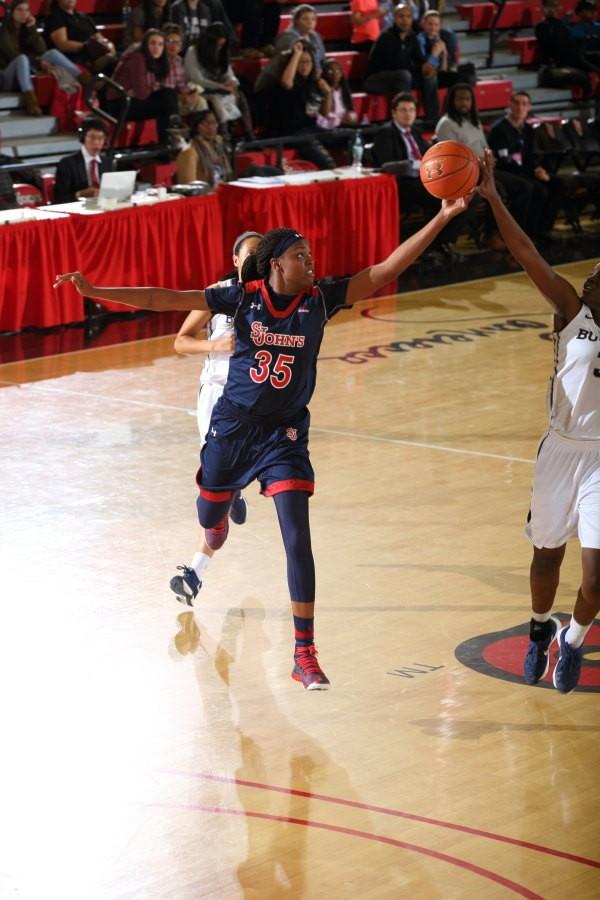 Imani Littleton had a career-highs in both points (14) and rebounds (9) versus Xavier on Jan. 22. (Photo: St. John's Athletic Communications)

Forward Imani Littleton’s impressive basketball career started getting more and more exciting during her four years playing for The Bishop’s School. Littleton scored over 2,200 points for the Knights and posted over 1,200 rebounds.

The four-star recruit was snagged by head coach Joe Tartamella and was officially made a Johnnie in 2014. “Imani is gifted at 6-3 to be able to have the mix of size, speed and athleticism that she has,” Tartamella said. “She has already increased her strength since the summer and will be a difference maker for us on both ends. Her length creates mismatches all over the floor and allows her to create second-chance opportunities on the offensive end.”

Her college career started off well last season. As a freshman, she appeared in 20 games, averaging 8.5 minutes a game, and was the highest scorer of her recruiting class posting an average 1.4 points per game and shooting 54.2 percent from the field. Rebounding remained a strength of hers as she posted 29 in total.

Littleton’s sophomore year has boosted her confidence. “I’m playing more so that helps,” Littleton said. So far, in the 2015-16 season, the forward has played in every game and has gotten a lot more playing time than she did as a rookie, averaging 20.9 minutes per game. With nine games remaining in the regular season, she has nearly tripled both her point total and rebounds of last season and is averaging 2.7 points per game. Her shooting has improved as well. Her field goal percentage has increased to 61 percent and her free throw percentage has more than doubled since last year to 42.1 percent.

Her off-season workouts have really paid off and her dedication to the game has shown. In the team’s Big East matchup against Butler on Friday evening, she was able to set a number of career highs. She recorded two blocks, and almost earned a double-double with 14 points and nine rebound.

“It felt great,” Littleton said. “It’s definitely exciting to get career-highs, but, more importantly, it gives me a lot of confidence going into the next game and for the rest of the year.”

Tragedy struck Littleton’s world in 2013 when her mother passed away. Littleton was a senior in high school and, throughout her career, her biggest and most consistent cheerleader was her mom. Even though her mom would no longer be in the stands, Littleton knew “she was still watching.”

Littleton, her family, her teammates and her coaches laid her mother to rest. Later that evening, the team had a game to win. Despite the emotional weight of playing, Littleton put on her uniform and led her team to a victory. She earned a double-double with 16 points and 10 rebounds, helping to keep the team undefeated and ranked number one. Her ability to overcome adversity is inspirational and shows true leadership: something that every great team needs.

This year’s season is the final season for dynamic duo seniors Denajah Grant and Aliyah Lewis, who have had an important leadership role on the team.

“I’ll definitely be sad to see them go,” Littleton said. “Even off the court, I look up to them a lot. Obviously next year, without them, it’s going to be different.”

The graduation of these women will mean the emergence of other team leader and because of Littleton’s athleticism, work ethic and success on the court, she is sure to be a force to be reckoned with for her final two seasons.

“I’m just trying to do my part.” Littleton said.