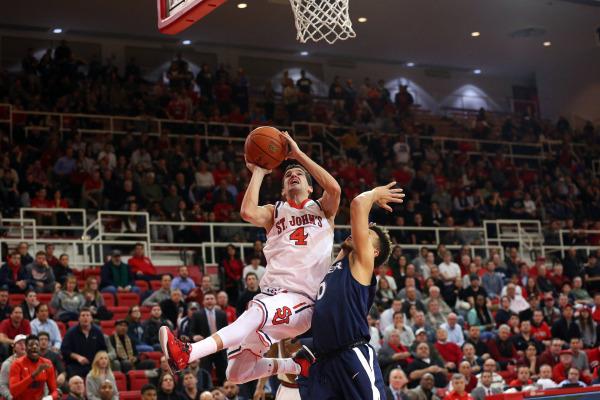 Federico Mussini scored all of his 19 points in the second half as part of the comeback effort. (Photo: St. John's Athletic Communications)

The young St. John’s men’s basketball team is still searching for answers, as they once again couldn’t pull out a close one.

After falling behind by 20, St. John’s effort almost got them that elusive win, but their losing streak still reached 10. Durand Johnson and Federico Mussini rallied the Red Storm (7-13) to within two in the final minute, but they couldn’t get any closer in a 78-73 loss to Marquette on Sunday.

“Everyone wants to win; no one wants to lose. We’re going to keep working and keep pushing because our coaches believe in us, and, as players, we believe in each other. That’s why we never got down on each other and kept fighting until the end,” Johnson said.

The game was moved from Saturday night at Madison Square Garden to Carnesecca Arena as a result of Winter Storm Jonas.

Bad shooting (34.8 percent overall from the field) and 13 total turnovers did the Red Storm in again in the first 24 minutes of the game, as Marquette went ahead by 20 early in the second half. Unlike in losses to Georgetown and Butler, Chris Mullin’s Johnnies were able to make a run in the second half.

“We came out like zombies to start the second half, but we didn’t give up. I was proud of the way they played in the second half. It just shows that if you play with energy and just lay it out there good things can happen,” Mullin said.

St. John’s showed much better effort on defense, as they forced Marquette into 22 turnovers on the game. Kassoum Yakwe continued his emergence in Yankuba Sima’s absence on the defensive end, as he collected eight rebounds, seven blocks and drew a charge that started St. John’s rally in the second half.

Mussini scored all 19 of his points in the second half, and Johnson scored a game-high 20 points, his fifth straight double-digit effort.

They tried to save their best for last, as Johnson hit back-to-back three-pointers to get St. John’s within two in the final minute. After a defensive stop, Mussini rushed the ball up the court with no timeouts left and forced off a jumper that missed with seconds to play.

“It was just about effort. We tried to give everything we had in the last 20 minutes and we played good, but because of the first half it wasn’t enough. I know I have to always be aggressive so I was trying to stay focused and help my teammates win the game,” Mussini said.

The defeat was the 10th consecutive loss for the Johnnies, and their seventh in Big East play. Despite the struggles, St. John’s first year head coach Chris Mullin praised his team’s improved effort in the second half.

“I’m not surprised because I’ve watched them each and every day comeback. They understand that they’re close. They’re working hard. They do the right things to succeed, but the process is the process and you have to honor that.”

The effort in the full 40 minutes has to be there in order for St. John’s to finally get off the schneid. At this point in the season, it’s all about  progress for this young squad.