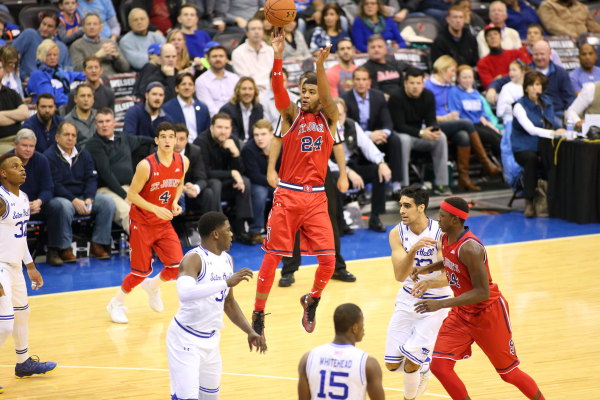 With a chance to pull off an upset against their rival and earn their first win since mid-December, the St. John’s men’s basketball team took a trip across the Hudson River to face the Seton Hall Pirates on Wednesday night.

The end result was not what the Johnnies hoped for as the Pirates dominated the paint and had more physicality on the glass on their way to a 79-60 victory over Chris Mullin’s squad at the Prudential Center.

“It’s been frustrating,” Mullin said following the game. “They killed us on the boards. We went zone to try to keep them from hurting us in dribble penetration but they really crashed the boards. A lot of their stuff was in the paint. They hurt us there for sure.”

Christian Jones, 15 points on 6-of-12 shooting, was the lone Johnnie to finish in double figures with Federico Mussini, Ron Mvouika and Durand Johnson all scoring nine points apiece. Kassoum Yakwe added eight points and 10 rebounds while Malik Ellison put up eight points off the bench.

The Johnnies started the game strong, jumping out to an 18-10 lead at the second media timeout, but their run was short lived. Isaiah Whitehead (19 points and seven rebounds), Khadeen Carrington (11 points) and Desi Rodriguez (eight points and six boards) were lethal off the dribble, effective in transition and when they were off the mark on their perimeter jumpers, Angel Delgado (15 points and 17 rebounds) and Ismael Sanogo (seven boards) were in the correct position for an offensive board.

The Johnnies were out-rebounded by 16 as they dealt with Yakwe’s foul trouble in the opening half and had no answer for Delgado’s toughness and strength early in the second. Seton Hall went on a 15-3 run after halftime to completely break open the game, turning an eight-point lead into a 20-point advantage.

“It must have been a bad halftime speech,” Mullin said. “The start of the second half cost us the game. More importantly, there was no resistance. They [Seton Hall] did what they wanted to do.”

While the Red Storm had a poor rebounding performance, they were even worse on the offensive end of the floor. They shot 29%from the field, 38% from downtown and 75% from the free throw strike. The shot selection was not impressive, the ball movement and spacing was lacking and the Johnnies were missing easy baskets around the rim.

The Pirates had 19 turnovers and shot just 53% from the free throw line but they had 15 offensive boards, shot 44% from all areas of the floor and used their length in the backcourt to limit the Johnnies leading scorer, Mussini.

With a loaded schedule within the next couple of weeks, it will take a stronger offensive effort and a better rebounding performance for St. John’s to earn a win.

“I do think it will happen,” Mullin said. “We will break through.”