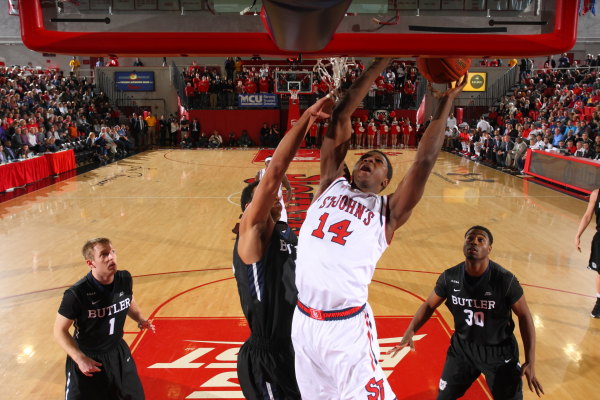 With St. John’s coming off an impressive performance at Xavier and Yankuba Sima returning from a seven-game absence, the stars seemed like they were aligned for the Johnnies to earn their first conference victory.

Instead, the Red Storm were throttled by Roosevelt Jones and the Butler Bulldogs, 89-56, in front of a near sold out crowd at Carnesecca Arena Saturday night. Jones put up a triple double, 10 points, 10 assists and 14 rebounds, and the Johnnies were out-classed on both ends of the floor by a hungry Bulldogs team that sits right on the NCAA Tournament bubble.

“We give Butler credit but we kind of shot ourselves in the foot,” Ron Mvouika said following the loss. “We broke down mentality. We beat ourselves down.”

Kassoum Yakwe led the Johnnies in scoring with 11 points and added four blocks while Malik Ellison and Ron Mvouika combined for 15 points. Durand Johnson (five points on 2-of-11 shooting) and Federico Mussini (seven points on 2-of-6 shooting) were stone cold from the perimeter and Felix Balamou followed up a career outing versus the Musketeers with just two points.

Sima, who broke his hand in the team’s third conference game, returned but looked rusty, finishing with three points in limited minutes.

Chris Mullin’s unit actually started the game with energy and aggressiveness, jumping out to a 12-7 lead at the first television timeout thanks to five quick points from Ellison. It was all downhill after the 12-minute mark, as the Johnnies reverted back to the poor shooting, inconsistent play and turnovers that have plagued them all season long.

“It was strange,” Chris Mullin said following the game. “We got off to a pretty good start. We looked pretty sharp and it looked like we had some carry over from the Xavier game. Then we totally fell apart. I saw some fatigue but that’s something all teams go through.”

Butler went on a 25-2 run over the course of seven minutes in the opening half and were clinking on all cylinders offensively despite an off-day from their leading scorer Kellen Dunham (just nine points). Jones, Kelan Martin (18 points) and company took advantage of the 21 St. John’s giveaways by converting in transition while they also knocked down open threes and had 22 assists on 31 field goals.

“We made 15 field goals and they made 31,” Chris Mullin said. “Even if you’re a defensive guy, you have to put the ball in the basket. That’s at any level. First, you have to get shots and when you turn the ball over, that’s a problem.”

With the losing streak increasing to 14 in row, the Johnnies will have to continue to build Sima’s confidence and get Mussini back on track if they want to earn a couple wins in conference play before the Big East Tournament.