No. 1 Nova too much for Johnnies 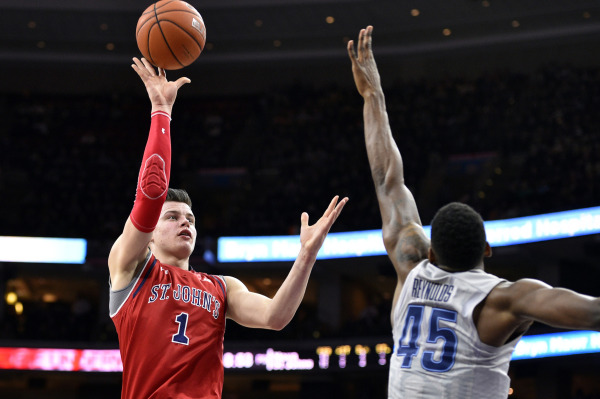 It’s been a theme that has become all too familiar for the St. John’s men’s basketball team this season. A strong and inspiring effort against a more talented opponent that ends up falling just short.

The season’s gloomy narrative continued Saturday night when the Red Storm suffered a 73-63 loss on the road against No. 1 Villanova in Philadelphia. Despite the overwhelming matchup, the Johnnies gave them everything they had.

“They’re a veteran team and well coached,” said St. John’s head coach Chris Mullin. “When you play the No. 1 team in the country, you almost have to play perfect.”

The loss continued what has become a brutal losing streak for St. John’s, as the Johnnies have now dropped 16 straight, 13 in Big East play, dating back to Dec. 18.

The Red Storm did once again get strong individual performances in the loss. Sophomore forward Amar Alibegovic starred, leading St. John’s with a career-high 18 points and added six rebounds and four assists.

The Johnnies began this challenging road matchup with some momentum,, as some strong shooting from three-point range left them with a 9-8 lead midway through the first half, but eventually they fell behind by as many as seven.

Holding Villanova without a field goal for the final 4:57 of the half, allowed the Johnnies to get back into the game as three-pointers from Johnson and Mvouika, and and Alibegovic jumper and an Ellison layup with three seconds left capped off a 10-4 run that pulled the Red Storm to within one, 28-27, at halftime.

Villanova proved why it’s the top-ranked team in the nation in the second-half. Wildcats big man Daniel Ochefu scored eight of his game-high 25 points within the first three minutes of the half as Villanova re-opened that seven-point lead.

“(Daniel Ochefu) is a big part of what they do,” said Mullin. “(Yankuba) Sima is just getting back in the lineup; he’s not in shape to play big minutes. So we played small on (Ochefu) and he kind of had his way.”

Aside from Ochefu’s dominant 25 points on 11-14 shooting from the field, Preseason All-Big East First Teamer Ryan Arcidiacono added 13 points and a pair of assists as well.

The overmatched Red Storm exerted the fight that they have shown all season, and eventually cut the Villanova back down to four.

The Wildcats offensive attack would eventually prove to be too much, and their lead eventually ballooned to 13 after a Mikal Bridges three-pointer with 10:04 remaining. The Red Storm could not get back within eight for the rest of the night.

St. John’s will return home on Feb. 17 when they take on lowly DePaul at Carnesecca Arena in what will be a great opportunity for the Johnnies to finally break this losing streak.