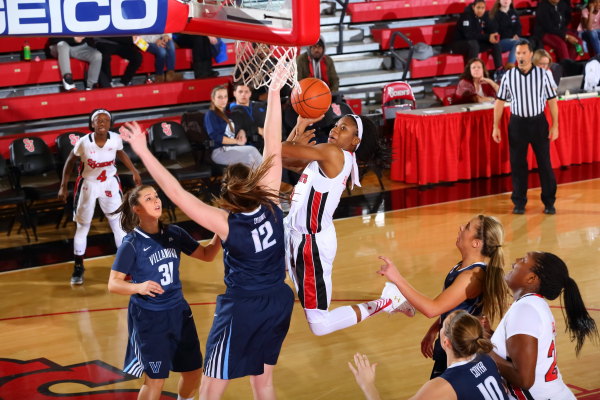 St. John’s suffered a setback Friday night on both the scoreboard and in the standings, as Villanova shot them down.

The Johnnies could not stop a hot night behind the arc by the Wildcats, and they fell to their rivals  71-59 Friday night. The win by ‘Nova allowed them to overtake the Johnnies in the Big East standings.  St. John’s (17-7, 8-5), fell into third place in a tie with Xavier.

“Obviously a tough loss and it’s frustrating coming off a nice win last weekend,” head coach Joe Tartamella said. “I thought Villanova played a great game and they hit their shots. We held them at times and other times they made some tough shots.

St. John’s simply could not stop Villanova, as the Wildcats connected on 11-of-23 shots from three. Alex Louin led the way with 18 points and five rebounds.  Caroline Coyer and Mary Quinn followed with 17 and 15 points, respectively.

“When they shoot the ball well it’s difficult to beat, we all know that,” Tartamella said.

The Red Storm started the game off with intensity, and led 15-12 at the end of the first period. Their momentum was stalled by poor shooting from the free-throw line (33.3 percent) and beyond the arc (22.2 percent).

Despite St. John’s hot start, Villanova took hold of the game in the second half. The Wildcats scored 18 points off of the storms nine turnovers, and turned a four-point lead into 16 with a 21-5 run into the fourth quarter.

Despite the frustrating defeat, Aliyyah Hanford and Danaejah Grant put up big scoring performances yet again. Hanford, who is on the watch list for the Naismith Trophy, totaled 17 points and 8 rebounds, and Grant had a total of 22 points on 10-of-18 shooting.

Those mental mistakes, however, did the Red Storm in, and they were eventually worn out by Nova.

“I was more concerned about our energy level and our ability to be ready to play. We had some good days this week and some not so good days in practice and we looked like we were less fresh. We looked like we didn’t have as much energy especially toward to the end of the game,” Tartamella said. “My frustration is ability to get them to a level tonight that they played in on Sunday. We have to be able to sustain a certain level of focus and energy.”

St. John’s is starting to become short on time in the Big East, with just four games left in the regular season before the conference tournament following a bounce-back win Monday at Creighton.