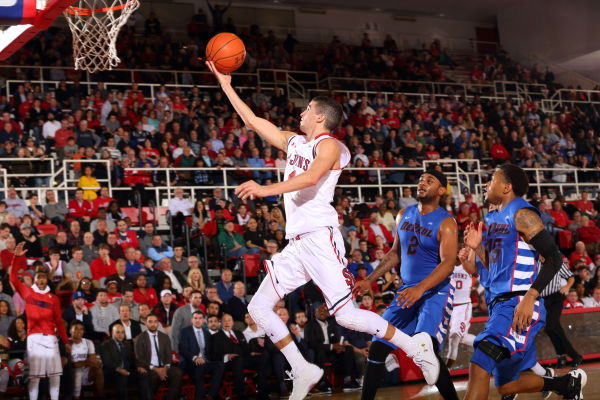 Federico Mussini scored all 17 of his points to lead St. John's to its first victory since December 13 (Photo: St. John's Athletic Communications)

As the final seconds ticked off, the fans, players, and coaches in Carnesecca Arena collectively breathed a sigh of relief; St. John’s two month-long nightmare was finally over.

The Red Storm got their first win since December 13 and snapped a 16-game losing streak with an 80-65 victory over DePaul on Wednesday night.

“We got one,” said Durand Johnson, after his last home game at a near-sold out Carnesecca, in which he led the team with 18 points. “It feels good to be on the winning side for a change.”

After all the struggles, St. John’s finally put together an effort good enough to get off the schneid, and got first-year head coach Chris Mullin his first Big East conference win in 14 tries.

The Red Storm built a 31-24 lead going into halftime, but it all came crumbling down early in the second half, as DePaul took the lead on an 8-0 run. At that point it looked as if it was going to be more of the same, because of bad shooting and turnovers galore.

Instead, the Johnnies got a huge boost off the bench from Federico Mussini. After being held scoreless in just five minutes in the first half, Mussini scored all 17 of his points in the second. He collected three rebounds and three steals and connected on 10-of-11 shots from the line.

“I just know I need to stay focused and I wanted to help my team,” Mussini said. “We knew we had to put in more energy [in the second half].”

“As a group, as a player, it takes a lot. You can’t just plan out that journey,” coach Mullin said. “I knew the situation coming in here. Good thing is, we’ve got a great group of kids, which makes it much easier.”

With Mussini, Ellison, and Johnson carrying the load offensively, and Sima and Yakwe locking DePaul down on the other end, St. John’s flipped a brief one-point deficit and eventually built a 20-point lead later in the second half to cruise for the win.

After shooting just 36 percent in the first half, the Johnnies turned around and caught fire in the second, shooting over 56 percent from the floor. They had 18 assists on 26 made field goals. They also held DePaul to 36 percent on the game, and outrebounded them 49-33.

“I’m happy for the guys in the locker room. They worked really hard. Their approach each and every day has been really impressive.” Mullin said.

With just four games left in the regular season, all St. John’s can and should do is try to use this long-awaited taste of victory and try to make it a habit.