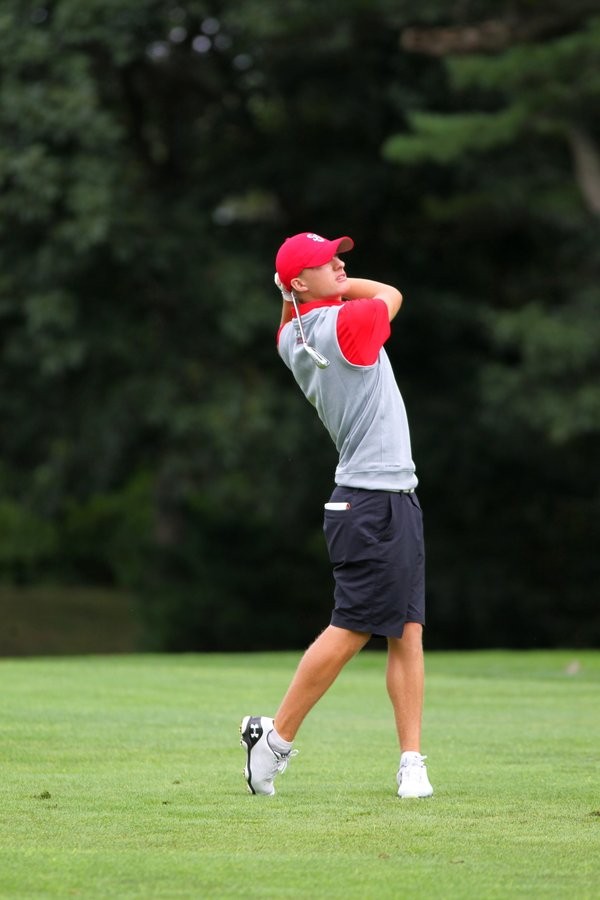 The Palm Valley Golf Club in Goodyear, A.Z. welcomed the St. John’s men’s golf team, along with 15 other teams from around the country, to the three day, 54-hole Loyola Intercollegiate Tournament. During Sunday’s opening round on the fairway, the Red Storm sat in 14th place after shooting a 289 (+1), but freshman standout Troy Evans finished only four strokes behind the overall leader, Connecticut’s Zack Zaback, shooting a 69 (-3) during his first attempt on the Palms Course.

With Drake, Loyola-Maryland and Manhattan trailing the Red Storm at the end of the opening day, the Red Storm sat just behind Utah Valley, who held a two-stroke lead for 10th place in the overall standings. Freshmen Seung Yub Baek and Michael Conforti recorded identical 73 (+1) opening rounds to keep St. John’s in contention for a top-10 finish. Indiana University occupied the top spot in the overall team leaderboard after shooting a 271 (-17), followed by William and Mary carding a 275 (-13) and Connecticut carding a 277 (-11), respectively. Junior Guiseppe Truglio was scheduled to open up the second round for St. John’s at 10:40 a.m, Monday morning.

Often regarded as the largest collegiate golf tournament in America, the St. John’s Women’s Golf Team traveled to Kiawah Island, S. C. to kick off the 2016 installment of the Edwin Watts/Kiawah Island Spring Classic on Sunday. The tournament, which utilizes two courses to account for its new 41-team field, was played for the second time in history at Osprey Point at the Kiawah Island Golf Resort, where Red Storm senior Anna Kim showed her dominance in carding an even-72 through the first 18 holes, good enough for a ninth place tie in a field of 216 golfers. With her finish, Kim sits just four strokes behind overall leaders Emily McLennan (Chattanooga) and Malene Krolboll Hansen (Coastal Carolina).

Freshman Kirsty Beckwith shot a 76 (+4) to put herself in a tie for 58th place following Sunday’s round. St. John’s, who shot 329 (+41) will look  to improve their 37th place standing as of Sunday, which put them above USC Upstate, Cleveland State, Presbyterian College, and The Citadel. Chattanooga sits atop the team field with a 283 (-5) opening round score, followed by scores of 290 (+2) and 291 (+3) from College of Charleston and Coastal Carolina, respectively.

After 36 holes of play, the top 20 teams will compete for the championship at Osprey Point during the final round, while teams 21-41 will play for a title at Oak Point.

Freshman Lydia Kim teed off at 11:13 a.m. Monday morning to begin the second round for St. John’s.