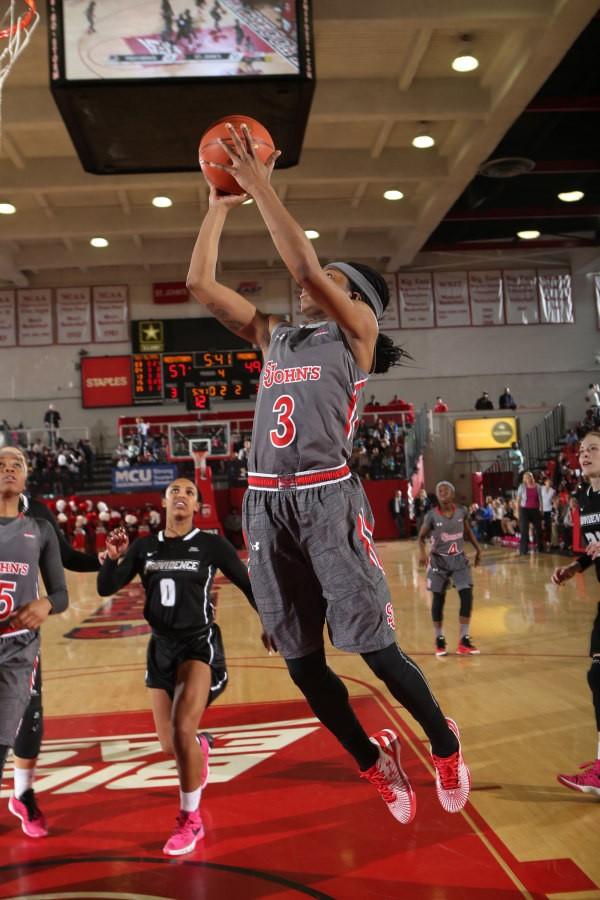 A hard-fought first half turned into an easy victory for the St. John’s women’s basketball team, but that took backstage to several individual and team milestones reached in a 69-54 win over Providence on February 26.

The team was led by seniors Danaejah Grant and Aliyyah Handford, who each posted 27 points. Handford became the team’s all-time leading scorer, passing Ling Ling Hou with 1,973 points. Grant moved into the top 10 in all-time scoring with 1,418 points in just 87 games. It was also the sixth time in the last seven seasons that the women have reached the 20-win plateau on a day that this program will never forget.

“I’m very proud of myself. I also thank my teammates,” Handford said. “They’ve helped me a lot to get here. Without them I wouldn’t have gotten here, so I thank them.”

It didn’t look like it would be a momentous occasion at the start. Providence scored the first five points of the game and the Red Storm didn’t sink a shot until Grant hit a free throw after two and a half minutes of play. St. John’s played soft inside in the first quarter, allowing eight points in the paint to their lone layup from Akina Wellere.

The Red Storm righted the ship quickly. They outscored the Friars 24-8 in the second frame and turned an eight point deficit into a seven point halftime lead. Grant and Handford combined for 27 of the team’s 35 points, taking over the inside game and catching fire with their jump-shots. The defense turned it up a notch as well, forcing eight of Providence’s 10 first-half turnovers in the second frame. From then on, St. John’s would not relinquish their lead and set the stage for a celebration of their stars.

Providence tried their hardest to get back in the game, but it seemed like for every jab they gave, they took two from St. John’s. Wellere and Imani Littleton got in on the scoring action, but it was Grant and Handford that ran the show. Defense created offense in the third quarter,just like it has all season for the Red Storm. Not only did they score seven points off of turnovers, they held the Friars to no points off turnovers, no second-chance points, and no fast break points in the frame.

St. John’s finished the game just about as well as they have all season, stretching a seven point lead into a 15 point victory with a 10-2 run over the last four minutes. Handford and Grant’s damage was basically done, allowing role players like Tamesha Alexander and Crystal Simmons to get time in the second-to-last game of the year.

“As a coach watching her, this is the best version of what I knew she could be,” Tartamella. “I’ve explained that to her and when she’s at her best, it’s impressive.”

The women concluded their season with their Senior Day on Sunday, where Handford and Grant got some of the loudest applause.