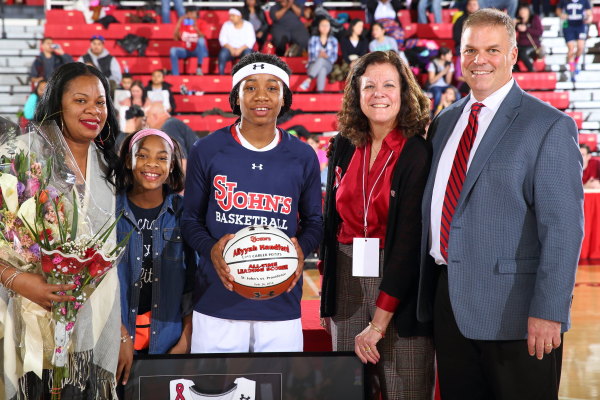 This wasn’t how St. John’s accomplished seniors wanted to get their last glimpse of Carnesecca Arena.

In their regular season finale, the Red Storm fumbled a six-point lead midway through the fourth quarter and fell to Creighton, 64-57, Sunday afternoon. It was a disappointing way for seniors Danaejah Grant and Aliyyah Handford to go out on Senior Day

Sophomore Sydney Lamberty played that spoiler role in the second half, as she scored 11 of her 18 points in the final two quarters to lead Creighton from three different six-point deficits until they jumped out by eight late in the fourth.

“Like coach said, unfortunately we were unable to get the win but we trust in our system and in our program,” Grant said. “We just have to regroup and focus. We didn’t get our footing tonight but we’re going to come back harder than ever.”

The loss was the final home game for two accomplished seniors for St. John’s. Handford was Tartamella’s first recruit since taking over as head coach at St. John’s in 2012, and Grant quickly established herself over the last two seasons since transferring from Clemson.

“To see these guys go through and to see what they’ve accomplished. . . Look at what Aliyyah’s done. An All-American, the all-time leading scorer in the program, she’s come from a tough place in Newark and has really grown as a person more than anything else,” Tartamella said.

Handford, now the program’s all-time leading scorer, led the game with 19 points, seven rebounds, and four steals. As St. John’s (20-9, 11-7), shot under 39 percent for the game, she remained the constant factor, fighting for second chances.

Despite the loss, Handford and her teammates switch their focus to the Big East Tournament, where they will try to make one last case to earn a bid in the NCAA Tournament.

“The next game is the most important game. We just have to stay focused, come into

practice and work harder than ever and we will see what we can do,” Handford said.

With the loss and a win by Seton Hall, St. John’s finished the regular season in fourth place in the Big East standings, and will now face Georgetown in the quarterfinal of the conference tournament on Sunday.