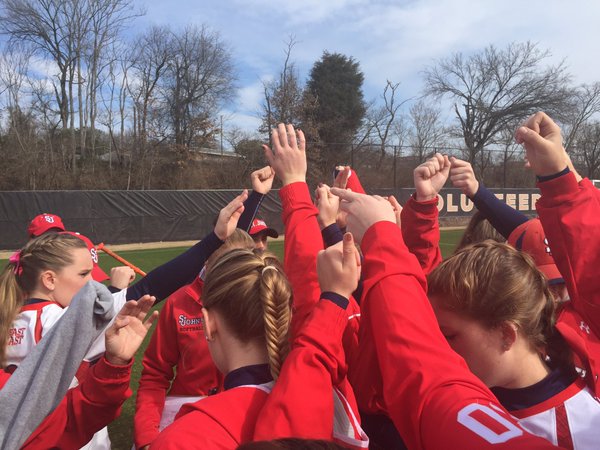 St. John's finished as the runner-up in the Tennessee Invitational during the weekend of March 5, 2016 (Photo: Twitter/@StJohnsSoftball)

St. John’s softball proved they can compete with the better programs in the country last weekend, as they placed second at the Tennessee Invitational. The team went 3-2 and lost in the title game 4-0 to the hosting Tennessee Volunteers.

The first game of the tournament was a close one. The Johnnies beat University of Alabama-Birmingham (UAB) 3-2.  After two singles were hit by Yvonne Rericha and Krystal Puga, Rericha was able to get home and open the game’s scoring off of a Blazer error.

Senior pitcher Tori Free struck out five and only allowed two runs. Brittany Garcia then had a two-run hit which gave the Storm the three runs they needed to win the game.

The second game was an easy 10-0 St. John’s win against Green Bay. The Red Storm recorded seven hits and two home runs. The first homer was hit over by Puga. The bases were loaded and she earned her first career grand slam.

Freshman Christina Melendez hit her third home run of the season. Lauren Zick and Wilkens scored two runs each. The Junior Grace Kramer showed her consistency on the mound and pitched seven strikeouts which gave her a total 28 strikeouts in the season.

Day Two to the Invitational started with a matchup against the hosts, Tennessee. The first inning ended with a level playing field of 0-0 but the Volunteers gained a three-point lead in the second. They added three more runs to grow their lead to 6-0 over the Johnnies after hitting a three-run homer.

Sophomore McKenzie Murray relieved Kramer and was able to pitch the third out of the inning. The Volunteers, however, would come out in the fourth inning and score five more to make it an 11-0 game. The Storm avoided the shutout in the top of the fifth and scored two runs. The game ended 11-2.

Saturday ended with another 3-2 Johnnies win over UAB. After five innings of competition, the game was tied at two in the sixth inning and Savannah Warren was able to hit a solo home run and secure the Johnnies a spot in Sunday’s championship game against the Volunteers.

The first two innings of the game were kept at 0-0. Free pitched four strikeouts but the Volunteers found the plate in the third. After Tennessee scored another run in the fourth and extended the lead to two runs, Madison Morris came in to relieve Free and got the last out needed to close the inning. Morris stayed consistent, as did the score through the fifth inning.

Murray was put in to relieve Morris and the Volunteers scored a single. The game finished 4-0 after a Tennessee walk with the bases loaded.

The Johnnies finished runners-up and will play in Hempstead, New York this coming weekend in the Hofstra Invitational.