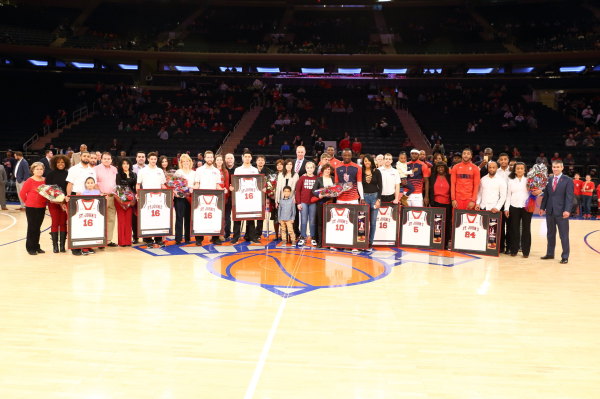 The hardest part is finally over.

The Chris Mullin rebuilding project at St. John’s concluded its brutal regular first season with a 90-76 loss to Providence on Saturday at Madison Square Garden, which kept with the year-long narrative for the Red Storm.

As in most of their Big East schedule, St. John’s (8-23, 1-17) dug itself into an inescapable hole, as Providence took advantage of its edge in experience up front and depth in the back court.

It was a tale of two halves once again, between multiple St. John’s turnovers and hot-shooting by Providence, it proved more than enough to prevent a surge by the Red Storm in the second period from becoming a comeback.

Committing 12 turnovers, St. John’s fell behind by 23 at the half, but their seniors would not go down without a fight in their final regular season game. The Red Storm shot a whopping 57 percent in the second half after being held to under 38 percent in the first. Led by their upperclassmen, they were able to cut the lead to 14 mid-way through, but they got no further as Providence put them away.

Honored before the game for Senior Day, Durand Johnson, Ron Mvouika, and Felix Balamou put together a performance that they can take all kinds of pride in for this program. Johnson had one of his better performances of the year, with a team-high 15 points. Balamou had eight points and six rebounds, and Mvouika hit a pair of three-pointers to go along with five assists.

For the season, Johnson finished as the team’s leading scorer, as he has set a standard for the less experienced Johnnies to take in following this battle of a season. Mvouika led the team in three-point shooting, and Balamou set a career high with 6.9 PPG.

“Regardless of how many losses we have this year, I feel like the younger freshmen learned from us older guys on and off the court — how to never give up, how to come in everyday and compete,” Durand Johnson said. “I felt like we definitely led them in the right direction so those younger guys know what it takes and how important every game is.”

It was a final performance that proved St. John’s resilience through one of the program’s worst seasons, and it will allow the program to build on the experience for the years to come under Mullin.

“The whole season has been pretty tough. Losing is not fun, but those three guys really helped myself and the younger players stay somewhat grounded and focused in our daily approach. I’m thankful of them for that,” Mullin said.

To think the Friars didn’t really need star Kris Dunn, as Jalen Lindsey and Ben Bentil torched the Red Storm early and often. Lindsey outscored St. John’s 18-16 in the first 10 minutes of the game on his way to a career high of 30. Bentil (23 points, 10 rebounds) helped carry the load for Providence later on.

As the No. 10 seed in the Big East Tournament, St. John’s will try to extend their season against Marquette on Wednesday night back at MSG. Perhaps a more inspired performance will be in order.