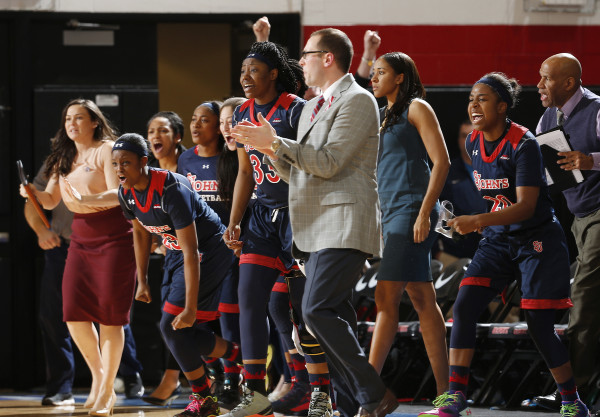 Only one program in Big East women’s basketball history has more than three conference tournament championships. On Monday night, St. John’s earned the chance to become the second following a historic upset.

Aliyyah Handford dominated late again, as St. John’s overcame an eight-point deficit to knock off top-seeded DePaul 75-66 in Chicago Monday night and punched the Red Storm’s ticket to the Big East Championship against No. 7-seed Creighton.

“This is what these ladies have worked for all year, and this would be a great moment for [Handford and Danaejah Grant] to be able to finish their career with a championship, so we’re excited to get ready for tomorrow,” St. John’s head coach Joe Tartamella said.

It was an inauspicious start for the Red Storm in clearly their biggest game of the year. They came out unafraid to shoot, but made just three of their first 12 shots after six minutes of action.

Senior Danaejah Grant, who led the Big East in scoring during the regular season, came up big in the second quarter. She used created space and used her smooth jump shot to try to keep the Red Storm in the game, including a big step-back three as the shot clock expired to tie the game at 21, but the Blue Demons kept their cool.

After a 9-0 St. John’s run, they answered right back with a 7-0 spree of their own, proving no match for the usual Red Storm defensive intensity. They hit back-to-back threes at the end of the half to turn a tie into a 34-28 lead heading into the locker room.

It didn’t look too great in the third for the Red Storm, either. Another 7-0 DePaul run pushed their lead to 10 halfway through the quarter. St. John’s didn’t give up hope though, and they got a huge energy boost from a beautiful connection from Aliyyah Lewis to Handford; a lofted pass that Handford jumped for and laid it up and in, all in one graceful motion. From there, the defense turned it up, holding the Blue Demons scoreless for more than three minutes and made the deficit just four with the final ten minutes to play.

Handford converted the and-one to make the deficit two and tied the score at 54 with a jumper. Grant and Handford combined to score all 11 points in a huge 11-0 run that gave them a lead with five minutes left; at one point, the Red Storm made nine straight buckets. The offensive spark bled over to the defensive side as well, forcing six fourth quarter turnovers.